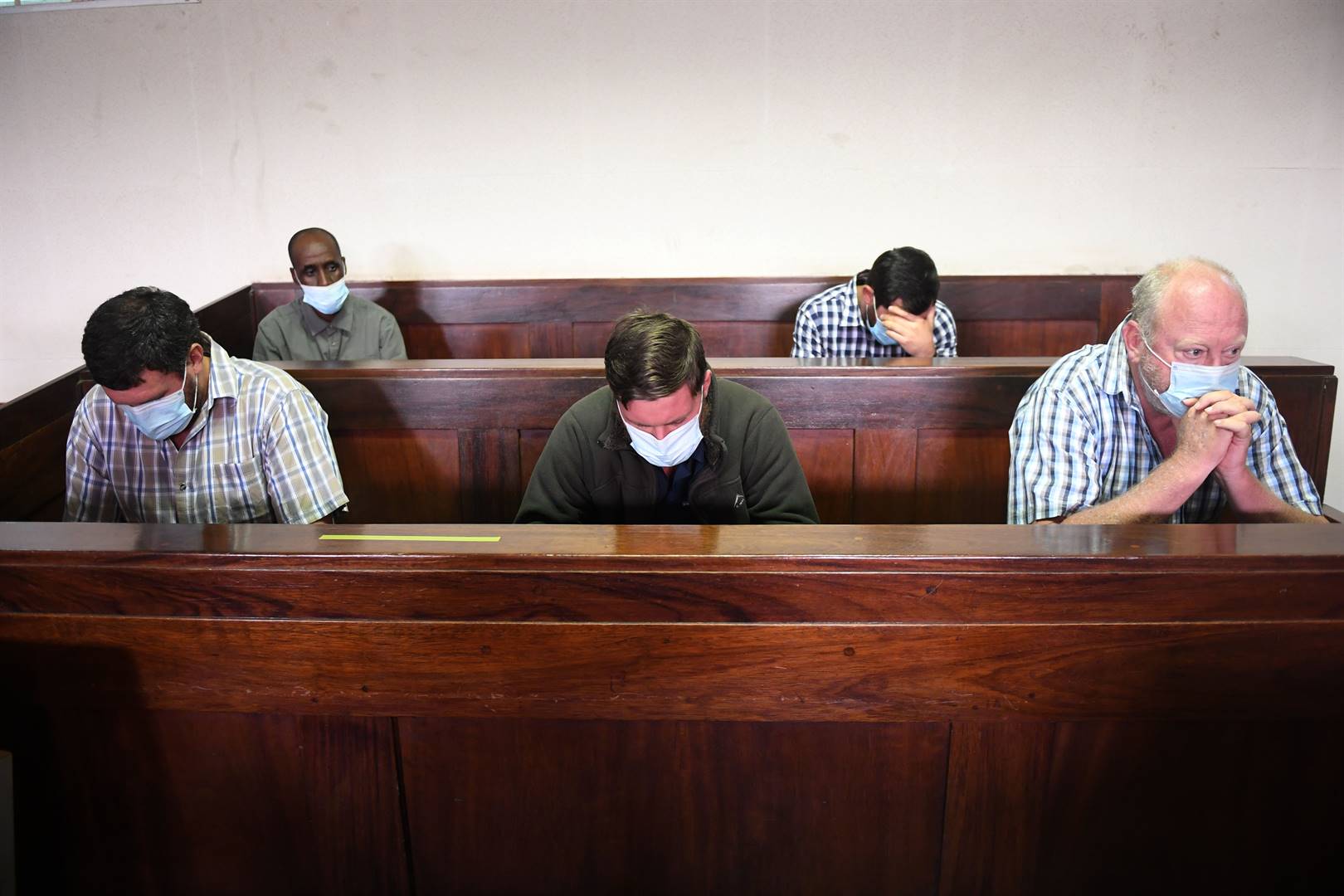 Vusi Shongwe, Mpumalanga community security and safety MEC, is concerned about the situation that could arise if bail is granted to the five men accused of murdering the Coka brothers.

READ The Coka brothers were fighting, CCTV is shown in the murder case of eMkhondo

They face charges of murder, attempted murder, defeat of the ends of justice and kidnapping after the deaths of brothers Mgcini and Zenzele Coka.

The brothers were shot dead during an altercation on the Pampoenkraal farm on April 9th.

The kidnapping charge refers to the alleged kidnapping of Nhlanhla William Hlatswayo during the detention of a citizen.

The five accused of the murder of the Coka brothers in the Piet Retief investigative court. They are Daniel Malan (38), Cornelius Lourens Greyling (25) and Othard Johann Klingenberg (53) in front. Behind are Zenzele Yende (48) and Ignatius Michael Steynberg (31).

The precinct in front of Piet Retief’s investigative court was lined with barbed wire while a convoy of police vehicles and Public Order Police units guarded a group of about 100 protesters from different political parties.

“To me, if we bail the perpetrators today, it looks like they will give us a handful as government and police because we will have to deal with the situation. My main concern is the situation around Mkhondo and Mpumalanga,” he said. Shongwe.

“If you look at the number of people here and the political parties, they all speak with one voice saying that these people should not get bail. If they are going to get bail, these people will be a task for the police to manage, and that is my point of view and concern. “

READ Murder of the Coka brothers: five defendants remain in prison because the sight of the bail is postponed

Shongwe’s comments followed tense clashes between protesters and police during previous appearances. Protesters have attacked motorists in the vicinity of the court.

“The police are up to the task; they have to live up to the task. It is the responsibility of the police to make sure they handle any situation in the province. If they need backup, it will come from everyone. the angles and make sure we manage this situation, ”he said.

Earlier, Klingenberg claimed he had acted in self-defense when he fired shots that day. The farmer said he had no plans to shoot, but acted because he felt he was in danger.

Mpumalanga MEC for community safety. Vusi Shongwe is concerned about how the community will react if bail is granted to the five men accused of murdering the Coka brothers. His bail application continues in court today #pietretief (@ TeamNews24) pic.twitter.com/F5JCviwHaz

Prosecutor Robert Molokoane argued that the five men acted with a common purpose and that each had been actively involved in the incident and all should be held responsible for the murder.

“The offense was committed in the execution of a common purpose, as the applicants foresaw the murder and, as they had been associated and persevered in promoting the common design despite this provision, it was an act for which they were legally responsible, “he said.

Defense attorneys argued that the shooting was a reaction to the assault of some farmers and was not premeditated, but a triggered reaction.

“The conduct of these farmers is clearly not an execution of a common purpose of killing one or any other deceased person. It is an objective and common cause that some of the farmers were assaulted, more specifically Mr Moolman, a fact that goes provoke the shooting of the dead man by a defendant three [Klingenberg].

“The IO [investigating officer] he could not and did not argue that there is a possibility that any of the defendants who shot, more specifically three defendants, would have acted in self-defense, “the defense said in its arguments.

As for self-defense, Molokoane argued that the two brothers were shot in the back, indicating that they were fleeing and not the aggressors.

The verdict on the bail application will be handed down on Friday.

Did you know that you can comment on this article? Subscribe to News24 and add your voice to the conversation.

Mark Zuckerberg is not going into space, so instead he is starting his business in the virtual universe

These are the winning numbers for Lotto and Lotto Plus