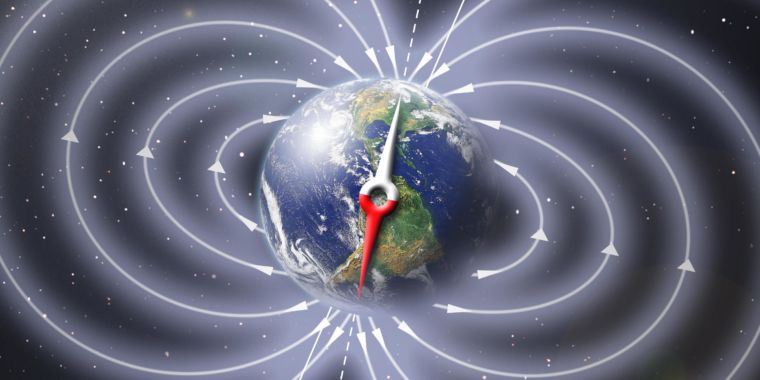 You've almost certainly seen the diagram-the layers of the Earth exposed like a slightly more complicated hard-boiled egg. The crust we live on is actually a thin shell, with the hot (but still solid) molding forming a thick layer below that. At the center-against Jules Verne-there are inner and outer core layers composed primarily of iron. The outer core is the only layer that's liquid, as the inner core is actually solid.

There are actually geologic records of the magnetic field. Tiny crystals of magnetic minerals in cooling magma will align themselves with the magnetic field before being frozen in place. This can be useful because Earth's magnetic field often flips poles (meaning compass needles would point to geographic south). The orientation of those mineral needles also indicates how close to the equator they were when they formed. The information trapped by these minerals was the last piece that cracked the case of plate tectonics, in fact, and it allows us to figure out where each continent was in the past.

We can also work out how strong the magnetic field was from these records. That's what a team led by Richard Bono and John Tarduno at the University of Rochester was most interested in when they analyzed some 565-million-year-old rocks in Quebec.

We do not have much data from that time period, which some researchers suspect could have been when the core core finally began to solidify. In this case, the igneous rocks the researchers were working with cooled slowly below ground, meaning their record probably spans around 75,000 years. That should be longer than a flipping of the magnetic poles usually takes, so any temporary changes like that should be averaged out.

The team found that the magnetic field was incredibly weak at the studied time. The late Jurassic Period stands out for having an anomalously weak magnetic field, but this was only about one-fifth as strong as that time period. On top of that, it seems that the magnetic poles were flipping around extremely freely. It's very weird behavior.

This data actually fits with the limited information we have from periods closest to this time, though, which is also pretty odd. And the study gets really interesting when you compare it to simulations of the history of Earth's core. Some of those simulations have predicted that the solidification of the inner core was fairly recent in geologic terms, occurring right around this time. In those models, the reorganization of the core causes the magnetic field to go wild for a while, thrashing around in a weakened state.

The researchers say their evidence fits with a scenario where the inner core just began to solidify around 565 million years ago-almost 4 billion years into Earth's life. This adds to questions about how the magnetic-field-producing "geodynamo" in the core looked before this time and how it lasted long. It also adds to the jam-packed list of weird things that were going on in this chapter of Earth history, which happens to include a remarkable evolutionary explosion of complex animal life.

In a summary accompanying the paper in Nature Geoscience, Carnegie Institution for Science researcher Peter Driscoll (who was not involved in the study) outlines the work needed to follow up on this succulent hypothesis: "Observations paleomagnetic additional, both directions and intensities are the obvious next step to provide a clearer picture of the state of the core around this time. Experiments on the solidification and conductivity of iron will further constrain the thermodynamics of the core. Lastly, numerical models of the evolving core can produce detailed predictions that test how all of these components come together. "

And if this timeline of the inner core's formation is correct, Driscoll writes, "the nucleation of the inner core may have occurred right in the nick of time to recharge the geodynamo and save Earth's magnetic shield."