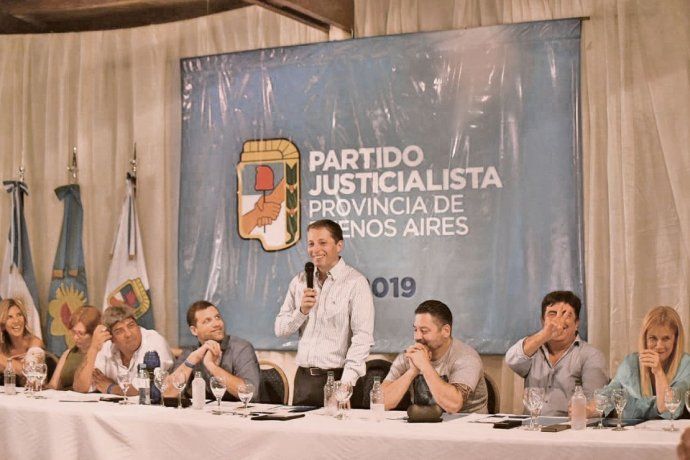 Armed in the interior of the Buenosairean Peronism by the slaughterers Verónica Magario and Fernando Espinoza, Insaurralde has masses as the principal ally to become a candidate for the PJ's governor in a front with Citizen Unit of Cristina de Kirchner. At the meeting of the Provincial Council of the PJ, last weekend in Santa Teresita, Espinoza disseminated the result of a survey that placed Magaria, the intendant of La Matanza, as the intendant-candidate with the most intention of voting for the government. Second appeared the ex-mayor and current deputy of UC, and third Insaurralde. It is the historic internal of the third electoral section between Lomas de Zamora and La Matanza that is now boosted by the fight for the candidature to governor of Buenos Aires. That's why Cristina has already warned that there will be no PASS since he is not prepared to face open political carnage in case of being a candidate for president. The antecedent of the fierce Primary between Aníbal Fernández and Julián Domínguez, which led to the triumph of Vidal in 2015, lands both the former president and Insaurralde.

However, in that fight Axel Kicillof was also placed. The former Minister of Economy also signed up to fight the government to Cambiemos and Cristina's favorite. Not only because of the mistrust of the current senator towards the communal bosses of the conurbano, specialists in ballot court and their own survival, but also because Axel is the candidate who most loyals the Kirchner's vote. That is, Kicillof is the figure that more and better captures the electoral flow of Cristina without losing votes on the way.

Before the ambush of kirchnerismo, that near Insaurralde with the duo Magario-Espinoza and also with Kicillof, the mayor of Lomas de Zamora initiated hermetic negotiations with Massa to explore the possibility of setting up a formula with Malena Galmarini. In that scheme, it is speculated that if April Massa did not break the ceiling of 14% of national voting intent, he could postpone his presidential candidacy to support Roberto Lavagna. To close a unity agreement and to be able to defeat Mauricio Macri in an eventual ballot, the Renovador Front expects that Cristina will not be postulated to the presidency either.

The possible Buenos Aires agreement between Christianity and massism also divided the waters between the PJ intendants. While figures such as Alberto Descalzo (Ituzaingó), referent of Peronism in the first section, are in favor of including the Renewal Front in an electoral coalition against Macrism, mayor of Ensenada, Mario Secco, said he does not want the unity with Massa. "Beyond the unity of Peronism, I want the unity with those who fight and did not betray. The unit I want to do it with all of them. Sometimes they ask me about the unit with Massa, and not … if I do not have anything to do with Massa, "launched the leader of the Kirchnerist party Frente Grande, one of the pillars of Citizen Unit. Secco considers that "Massa has co-ruled with María Eugenia Vidal and Macri and voted for everything they wanted the Liberals." Felipe Solá, who abandoned the massacre to build a "unity" front next to Kirchnerism, yesterday asked the Renewal Front to understand as a "patriotic question" the need to move towards an electoral "union" to dispute power in October and He evaluated that "it would be great" that Lavagna be integrated into "great Peronism". He also considered that the former Economics minister has a "very limited" political position to embody a hypothetical presidential candidature.

Today, about 20 intendants from the province of Buenos Aires, headed by the president of the Buenos Aires PJ, Fernando Gray, will meet to present a collective shelter against rising rates.