Neukuen: tired of blocking the garage, wrote an "inspirational" poster in Pablo Escobar 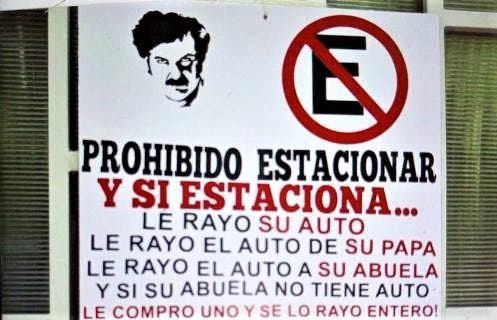 The well-known "E" sign, indicating prohibited parking, was not enough. Laura always left her house in Neuquen and found a car that blocked the garage door. Then he did genius to action.

The information was published by Diario de Neukuen, who talked with his wife. Laura said she no longer left the cars and explained: "The idea of ​​a poster is to be kind and to stop, read, laugh and not park, I never go out to scratch my car or anything, more than anything surprising with humor, and it shows respect for others ".

This phrase is taken by the one heard in the famous series, in a scene in which Escobar issues the following threat: "I will kill you father, mother, uncle, his wife Maria, child Santiago, girl Pilar and her grandmother, and if grandma is already dead, I'll dig it up and kill her again. "

House Laure is in Brentana at 500, according to the media, near the clinic. This is one of the reasons why many movements are and therefore, when covering the garage, it is difficult to find the car owner to ask him.

Most read on Sunday