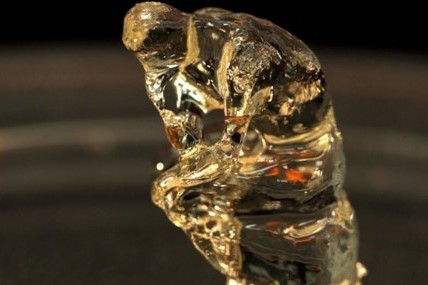 The 3D printer you can see in action in the following video can create smoother, more flexible and more complex objects than is possible with traditional 3D printers.

Named as the 'replicator' by its developers, following the device of Star Trek that can materialize any object on request, You can also cover an existing object with new materials.

The new printer is based on a viscous liquid that reacts to form a solid when exposed to a certain threshold of light. The 3D printing resin is composed of liquid polymers mixed with photosensitive molecules and dissolved oxygen. Light activates the photosensitive compound that depletes the oxygen. According to the assistant professor of Mechanical Engineering at the University of California, Berkeley, United States, Hayden Taylor, one of its developers:

The fact that you can take a metal component or something from another manufacturing process and add customizable geometry, I think that can change the way in which the products are designed.

This is the first case in which you do not need to create custom 3D portions per layer. It makes 3D printing really three-dimensional.