Rodríguez Larreta campaigns and bets everything on the … 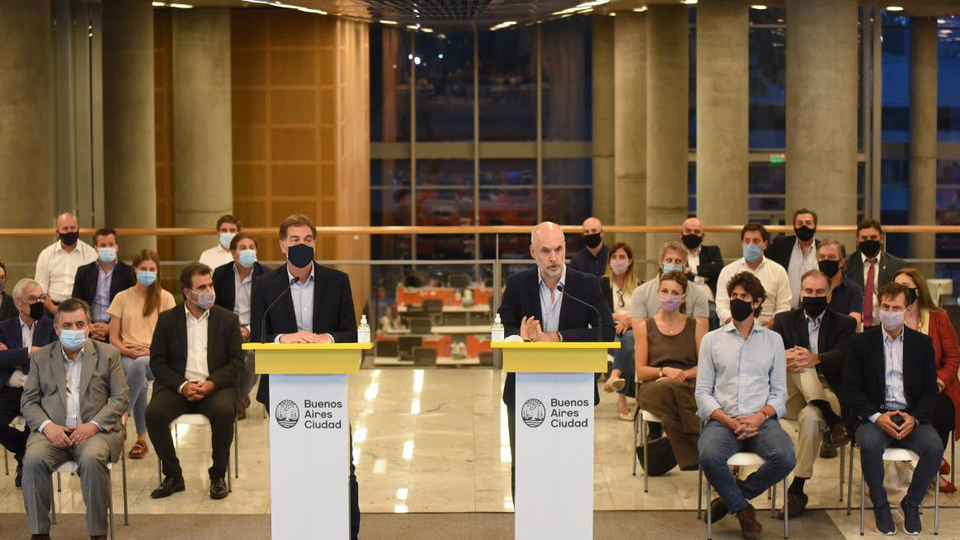 While the bill fixing the sum of the transfer of the Federal Police to the City did not become law and will be dealt with again by the Senate, the head of Buenosairean Government, hurried to mount a press conference in which he returned to exhibit like presidential candidate. The mayor of Buenos Aires, who was accompanied by his main allies, announced that he will file a new lawsuit before the Court and demanded that it be resolved soon. Larreta pointed against the national government: “What do they want? Take the police out of the City? Take away the security of the people so that the barrabravas enter Casa Rosada, as happened the other day. ” submission. ”In plan of victimization, he recalled the criminal complaint filed by the national Secretary of Human Rights for the action of the City Police which, on the other hand, he said has“ a professional exercise ”.

The head of government reassembled a scene similar to when Alberto Fernández he signed the decree which reduced the co-participation which, at the time, had increased Mauricio Macri for the benefit of the City. In both cases the tone and stage pointed to a presidential launch. He was accompanied by Deputy Chief Diego Santillian – on a lectern in the party, Senator Martin Lousteau; the Minister of Education, Soledad Acuña; bloc leaders Cristian Ritondo, Mario Negri and Maximiliano Ferraro, as well as other allies, including Graciela Ocaña.

“11 weeks ago in this same place I gave an alert conference on the National Government’s progress on the City,” Larreta recalled. “One more step was taken this morning. This advance was consolidated not only by increasing the amount they take out of us, but by making it discretionary.” “Unfortunately, in recent months we have had to face situations that go against the values ​​of management and teamwork. We proposed management and they gave us makeshift decisions. We proposed consensus and they returned arbitrary impositions to us “.

“With the law it hurts the City more. It removes 12 billion more. The Government accelerated to do so on the last day of sessions. There was no need for so much difficulty,” he remarked. The head of government took the opportunity to punish the members of the Front of All elected by the Buenos Aires district: “There was a senator and seven deputies elected in the city who voted against their neighbors. Look how far the crack. Incredible “.

“It is very difficult to think that with the law that is being removed, a well-intentioned dialogue will be faced. While the negotiation is taking place, the cut is continuing. An opinion is being asked from a body that is not neutral. position in favor of them. it’s like they call us to a party with a sloping track. Is this a vocation for dialogue? “, asked about the body that makes up the provincial governments.

The head of government announced that he will appear before the Court again, And took the opportunity to put pressure on him: “We have already filed the lawsuit before the Court by decree and we will file a new lawsuit by law. We need the Court to resolve as soon as possible.” Without giving details, made it clear that new cuts (and taxes?) will come in the Buenos Aires Budget: “We will have to reorganize our public accounts. We will have to take additional measures,” he said, while defending the credit card tax.

“To all this conflict situation, is added the fiscal consensus. They ask us not to make claims to Justice. Inconceivable. Over the weekend Diego and I filed a criminal complaint for Diego’s funeral. This has political intent. “Larreta remarked that, in a presidential tone, he said:” This affects all Argentines. These attitudes only deepen the crack, “

Prior to his speech, Larreta met with congressional leaders to assess the situation. From Together for Change, after countless attempts to block the screen, issued a statement signed by the party presidents: Patricia Bullrich (PRO), Alfredo Cornejo (UCR), Maximiliano Ferraro (CC-ARI) and Miguel Angel Pichetto (himself ). “From Together for Change we warn about the institutional gravity generated by submission to the Constitution and the rules of the National Congress,” they said. They argued that the initiative seeks to “impose a punishment on the good administration exercised by the Government of the City of Buenos Aires in recent years.” “Today they do it with the City, tomorrow they will be able to do it with any province they want to subdue,” they assured.

This same message was sent to him by different leaders in Córdoba. The anger with Governor Juan Schiaretti was obvious: Larreta spoke with him before the session, but the Cordovan ended up contributing decisive votes to the law. In Patricios Park they admitted that things did not go well between Larreta and Schiaretti after this play, although they bet that in the future it will be reconstituted. “They won the box”, They told Deputies. They claimed that an ANSES publication will soon be seen in relation to the Córdoba retirement fund that “will explain everything”.