Schiaretti in the Legislature: between works, criticisms of Macri and a strong commitment to the future 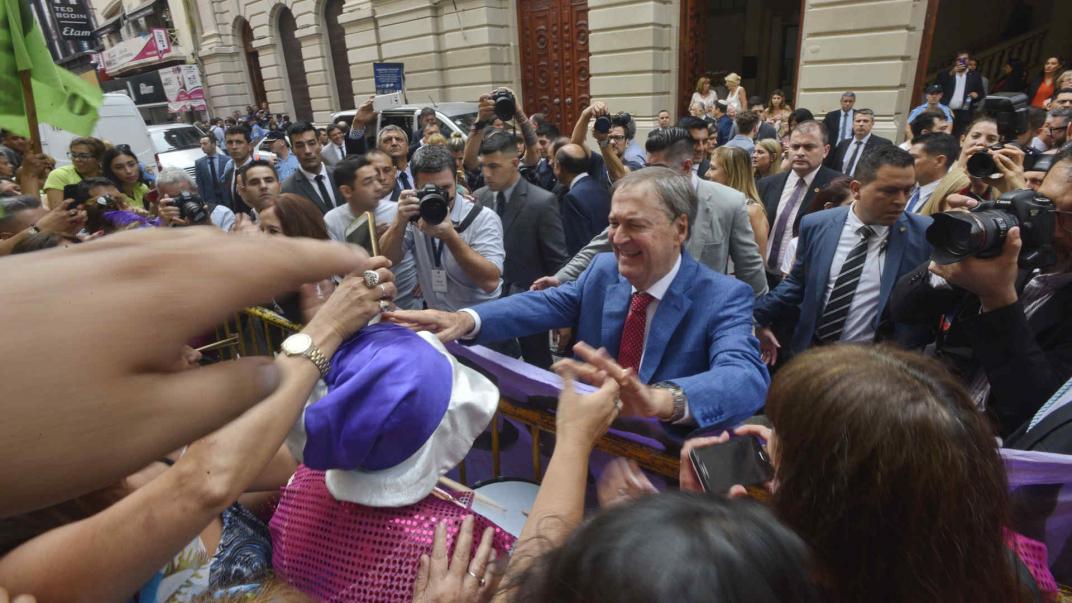 Governor Juan Schiaretti today opened the 141th ordinary legislative period of Córdoba, the last in the historic building of Dean Funes i Rivera Indarte. He spoke for 48 minutes, where he reviewed his management, made several references to the economic "crisis" and promised works in homes and more social assistance.

There was no mention of its possible candidacy for the elections nor to EPEC nor to the cost Córdoba.

"I came once again to this Legislature, to comply with the constitutional duty of directing the message of opening a new session. I do it with the joy of having visited in three Years of mandate of the 427 municipalities and communes of Córdoba, leaving in each of them some work and implementing the programs of the Province, "said the president.

Among the opponents, in addition to the legislators, the national deputies Mario Negri and Nicolás Massot were present. The incumbent Ramón Mestre was not there (he went with his family to Brazil). On behalf of the Municipality, Vice-Mayor Felipe Lábaque attended.

In the honor box, next to Schiaretti, Natàlia de la Sota was placed, one of the daughters of the ex-governor, José Manuel de la Sota.

The governor, who arrived after 9.35, was received by the Peronist militancy, who won the tribunes of the enclosure and unfolded flags of the PJ.

Schiaretti began his speech at 9.42, with a clear reference to his management and happiness for having fulfilled the promised works.

Also, as usual, he made a mention of democracy and reminded the "30,000 disappeared." Then, Schiaretti spoke of the governors of democracy: he mentioned to Eduardo Angeloz and Ramon Mestre, and had a special mention for De la Sota. "My roommate," he said.

"Our young democracy still has debts. Essentially, social debts, and to pay off, we have to work on all the estate of the State. Therefore, we must leave behind the left, to build the future of the Argentines, thinking of a country for all, "said Schiaretti.

In another part of the speech, and without mentioning it, criticized the Mestre intendant for the disputes that he had experienced over the last few months.

"I have been and will continue to be with each of the intendants of the entire province, to work together in favor of the quality of life of the people," he said, adding: "You can not have another a higher objective than to improve the lives of our people. Therefore, I will never spend time in sterile discussions that only pursue personal positioning, discussions that fail to solve the basic problems. in this sterile discussion, the only one that loses is the neighbor and that is intolerable ".

And then he remarked: "We went to Argentina by working all together, agreeing to policies of the State, without fear of consensus."

Immediately, Schiaretti made a clear reference to his government in relation to Maurici Macri. "Defending the rights of Córdoba, this is the trademark of this government," he said.

He emphasized the role of the Province. "Because we have a flag well in the high part and we will never lose it: the interests of Córdoba are not negotiated with anyone, we defend Cordova and the Cordovans. We will never resign or resign anything. In Cordoba, what is of Córdoba," he emphasized. In addition, the president affirmed that "the registered trademark of this government is to defend Córdoba".

"We did it only with the effort of the Cordovans, since nobody gave us a single weight," he said. "Here they are, as you see through the province".

"And because predictability is the basis of our management, I would like to say that in the coming years, as well as with gas in each town or city, we will work to reach the gas until the fire of each house , from each factory and from every small and medium-sized company, "promised the governor.

Schiaretti also mentioned the ambitious project of connectivity and communications that he launched in Córdoba. "The State must change to accompany the transformations of the companies. That's why we created the Córdoba Connectivity Program that extended the optical fiber throughout the province," he reviewed on the works already done.

"Being connected is to equal opportunities for everyone. That's why, as we are doing in the Capital, we will move forward to have free wifi in places and public spaces of 54 other locations," he promised to make his speech average.

Then, he came back to refer to the country's crisis.

It was then when he said that Argentina is experiencing a "tremendous crisis," which leaves a person on the streets every day: "The tremendous crisis that is in Argentina leaves a countryman without work, and This is a topic in which no one can make the distraction. No one can look elsewhere. "

The agent made an announcement that called attention, since it exceeds the terms of its current mandate. In this plan, he promised that in the next four years 25,000 houses will be built in the province. "Plan that reached the sectors that are in the informal economy," he said.

But in addition, he said that in Córdoba they will finish the ranches.

"We work in residential solutions: we are going to finish eradicating the 2,410 ranches of the north and west," he said. According to Schiaretti, more than 86,000 families were able to expand their home with credits at the zero rate of the Vida Digna plan.

"Also, thousands of Provencans have been able to get their own lottery through the El Tinc program, where they dreamed to raise their home. And also many other Cordovans who already had a lot started to build their house with the housing program Seed to the whole province, "he said.

Schiaretti also emphasized that its management will double the cost in terms of social containment.

"It is because our Córdoba is not so affected by the situation that the country lives in. Because in the uncertainty that generated the crises, the Cordovans knew how to anticipate ourselves to the times; we learned to work together, state and intermediate, religious institutions , trade unions, professionals, NGOs, organizations of the popular economy, and thus we have managed to build a true social network, unique in Argentina recognized by international organizations, "he said.

Schiaretti at the end of the Legislature (Pere Castell).

In this regard, he said that this year ("where the country's crisis feels strong"), the Province will allocate 19,398,000 pesos to social programs. "Against 10.084 in 2018, we are practically doubling the funds, to prevent the crisis from killing the Cordovans even more."

The provincial chief executive promised that the Circumvallation of Córdoba will be completed this year.

"We will also conclude the descent of the High Summit Path and the Costa Azul variant with its imposing bridge over Lake San Roque, which is the first part of the new highway towards Punilla, as we are going to finish # 39. , Córdoba-Jesús María-Colonia Caroya highway and the Cordoba-Río Primer highway ", added Schiaretti.

And it again emphasized that these works are made with own money. "Resources that we only bring the Cordovans, no one gives us any weight to finish them," he said in reference to the National Government.

"We will also conclude the Circumvallation of Marcos Juárez, the one of Laboulaye, the one of Beautiful Ville, the one of the Carlota, the one of Third River, the accesses paved in diverse localities, the pavement of route 26 to the south-south until the limit with the province of Buenos Aires, that of the route that joins Taninga with Els Túnels in the Cordovan west, the route Les Arrias- Sebastián Elcano to the north, the route Vila Santa Rosa-Les Gramillas to the center-east, the Marc Juárez – Saira to the southeast, among others we are doing, "he detailed.