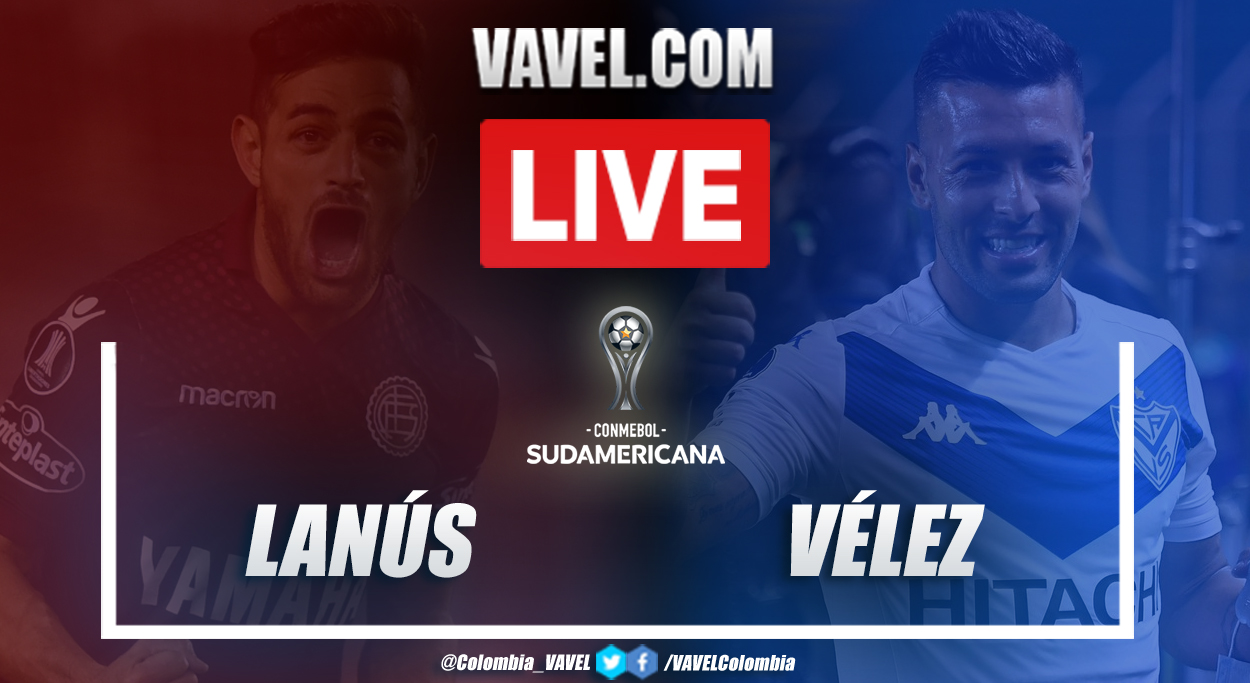 The transmission of the match ends

Thank you to all the readers who accompanied us on this meeting and look forward to seeing you at the next opportunity.

The match ended and Lanús proved to be much more than Vélez in 180 minutes and defeated him with a 4-0 overall.

Free kick for Vélez very close to the Lanús area.

Goooooool! in a counter Lanús takes advantage of the spaces and José Sand sends the center for Tomás Belmonte to Lanús.

Corner kick for the team of Velez.

Change to Lanús to continue closing the meeting and wait for the last minutes to pass.

In the last minutes and both teams are not looking for the attack because the series is already closed.

Foul in favor of Lanús in the middle of the track and yellow for Juan Martín Lucero.

Arrivals in the two arches go down again.

Lack in favor of Lanús in the middle of the court.

Lower the intensity of the meeting in the last minutes.

Two more changes are presented to the visiting team.

Velez keeps coming, but with a lot of despair because they don’t raise any in the series.

First change in Lanús that begins to close the meeting and the series.

Free kick in favor of Lanús in his own field and yellow by Héctor de la Font to Vélez.

The first changed to Vélez Sarsfield.

In the last minutes the intensity of the meeting has dropped.

Corner shot in favor of the visit.

Goooooool! The second goal of the local team with a center that passes through the area of ​​Lanús arrives and Nicolás Orzini scores his sixth goal in the championship and draws two players at the top of the table of scorers.

Dangerous free kick in favor of Lanús who goes for the second of the match and be calmer.

Free kick for Vélez that is charged in the middle of the court.

In the last minutes the intensity of the meeting has dropped.

Vélez is penalized for a foul on Brian Aguirre in Lanús.

Vélez keeps trying to get closer to the series, but they fail to beat Lautaro Morales.

Free kick in favor of Vélez starting the second half.

The second half begins

The second half begins and Vélez goes with everything in search of the arc of Lanús to obtain the two goals that give the classification him in the end of the South American Glass.

The first half ended with a difference for Lanús after they took advantage of the expulsion of Cristian Tarragona to Vélez.

Gooooool! In the first risky arrival of Lanús in the encounter arrives Jose Sand to send a center to which Tomás Belmonte arrives and marks the first goal of the party.

They play three more minutes in the first half.

Lanús fouled in the middle of the court and Cristian Tarragona was sent off in Vélez’s team.

Corner shot in favor of the visit.

Shot by Cristian Tarragona in the arc, but he lacks the direction to go up in the game.

Vélez’s team found the tie in the series after Cristian Tarragona took advantage of an error by Lautaro Morales, but they realized it was a foul on the goalkeeper.

The visiting team responds with a corner kick.

Corner kick for the team of Lanús.

The intensity of the meeting in the last minutes decreases again.

Foul in favor of Vélez that is charged on his court and yellow card for Federico Mancuello on the visit.

Great arrival of Vélez with a center that manages to connect Cristian Tarragona and Lautaro Morales stays with the shot.

The only solution that Lanús finds to stop the attack of the visiting team is to commit fouls, they go 4 in the last five minutes.

Lanús plays this game with the calm of the result of the first leg, but not attacking can play against him.

Again dangerous free kick for the visit and yellow card for Lautaro Acosta that in case Lanús reaches the final will not be able to play it by accumulation of cards.

Dangerous free kick in favor of Vélez, within walking distance of the Lanús area.

Thiago Almada receives a ball in the box, but Lautaro Morales takes the ball on.

In the last minutes the arrivals in the arches have gone down.

The visit surprised with a shot by Thiago Almada that was deflected.

Vélez had a brilliant opportunity to reply as Lautaro Morales received a high ball from the right, striking the ball in the air.

In the last minutes the intensity of the encounter in the arcs has lowered.

Lucas Hoyos is wrong and Lanús’ second goal in the series almost arrives.

In the first minutes of the meeting Vélez goes with everything in search of the result.

The match begins where Vélez will try to turn the series around which is 1-0 in favor of Lanús.

The teams go out on the court

The teams are already on the field to define the first finalist of the South American Cup.

The broadcast of the match begins

The match begins on the Directv Sports channel.

The referee for the match will be Wilton Sampaio (Brazil).

The match will be played at the Néstor Díaz Pérez Stadium.

Last match between the two teams

The last time these two teams met for the South American Cup being local Lanús was on August 30, 2006 for the second round of the tournament where Lanús won 2-0 with a double by Rodrigo Archubi.

Where, at what time and how to watch the match Lanús vs Vélez live?

How to follow the match between Lanús and Vélez?

The match will be broadcast by Directv Sports. In Vavel Argentina you can follow the game minute by minute.

Cristian Tarragona is the most decisive player in Vélez, he has made a great South American Cup and can give back hope to the team.

Jose Sand is the most determining player in the local equipment, thanks to they are above in the series and can be determining in the return.

These two teams have faced each other 27 times with 10 wins for Lanús, 11 draws and 6 victories for Vélez.

Vélez’s last match as a visitor

In the last party that played Vélez in condition of visitor by South American Glass it defeated 1-3 to University of Chile with goals of Cristian Tarragona, Lucas Orellano and Juan Martin Lucero.

In the first party of the quarters of end against Independent the party was even to 0.

How does Velez arrive?

Those led by Mauricio Pellegrino qualified in the final of the zone complement of the Cup Diego Armando Maradona after beating 3-2 to Godoy Cruz with goals from Juan Martín Lucero, Hector de la Font and Agustí Mullet.

How does Lanús arrive?

The home side came to this match after beating Rosario Central 2-0 in the complementary zone of the Cup Diego Armando Maradona with goals from Franco Orozco and José López.

How is the Series?

Lanús’ team beat Vélez as visitors with a goal from José Sand in the first half of the match.

Good night! This time we will take to their homes the duel between Vélez Sarsfield and Lanús for the return semifinal of the 2020 South American Cup.

Exercise reduces the risk of being hospitalized for coronavirus