This is Dragonfly, the "helicopter" that will explore the exotic moon Titan of Saturn – 2019.01.29 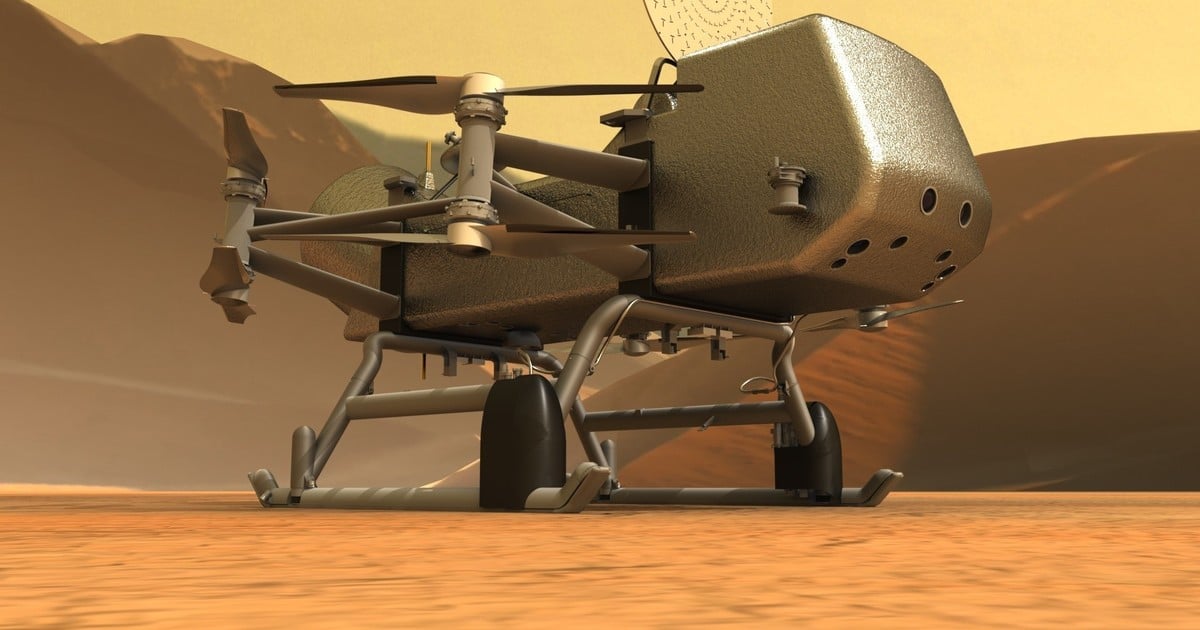 The Applied Physics Laboratory of the Johns Hopkins University (APL) released a detailed picture of Dragonfly, a rotor landing vehicle designed for the exotic Moon Titan of Saturn.

Designed to sample surface materials and measure the compositions of Titan's organic surface materials, Dragonfly It is a kind of helicopter that is capable of exploring a variety of locations to characterize the habitability of the Titan environment, investigate the progression of prebiotic chemistry and even look for signs Life chemistry based on hydrocarbons or water.

The instruments that compile this information are under development and are being tested in conditions similar to those of Titan, reports the APL in a statement.

Dragonfly, which means dragonfly in English, is competing to become the next mission of the New Frontiers class of NASA, a decision that will be taken this summer. If NASA chooses it, It will be launched in 2025 and will arrive at Titan in 2034. Unlike the wheels on wheels on Mars, it flies and can travel long distances.

The dense and quiet atmosphere of Titan and the low gravity make flying is an ideal way to explore; In fact, under these conditions, the flight is easier to Titus than on Earth.

"Dragonfly offers the revolutionary ability to visit several sites on the surface of Titan, tens of hundreds of millions of miles away," said Elizabeth Turtle, principal investigator of Dragonfly APL. "In any of these sites, the payload of the Dragonfly instrument could help us answer key scientific questions in disciplines that include prebiotic chemistry and astrobiology, meteorology, geophysics and geomorphology."

The Dragonfly team uses this stage of its study, called "phase A" in the language of NASA, to develop and demonstrate aspects of this payload.

It has been shown that the rotating percussion drill generates cuts to a range of cryogenic ice cream and organic material. And the pneumatic transfer system transports these samples from the drill to a mass spectrometer with laser desorption and gas chromatography, based on Mars Rover Curiosity's Sample Analysis at Mars (SAM) instrument.

A new application of a neutron-activated gamma ray spectrometer would quickly identify the bulk elemental composition in Dragonfly landing sites. Earlier versions of this instrument have required cryogenic active refrigerators, but in Dragonfly could use the cold atmosphere of Titan to passively pass the detector temperature.

The designs for meteorological and geophysical instrumentation, identified in previous studies of the Titan mission, have been improved with a solid hydrogen sensor in the solid state, to measure the spatial and temporal variations of # 39 ; this gas as a possible indicator of the geological or biological exchange with the surface of the moon.

Geometer tests and a low temperature seismometer show that they could work under Titan conditions, and seismic wave propagation simulations show As Titan's tremors could reveal the thickness of the ice layer that covers its ocean of internal water.

The cameras would take panoramas from landing sites and the camera of microscopic images Detect surface materials as small as sand grains. Scientists would use images to characterize geological structures and provide context for the samples. Aerial imagery would provide the context of surface geology and would be used to explore possible landing sites.

The Huygens probe, the only landing module in Titan to date, demonstrated the potential of Titan's aerial and terrestrial images using the ambient red light of the moon. Dragonfly will also use LED arrays to provide nocturnal pictures of Titan's materials, And ultraviolet illumination to characterize Titan's organic sediments and hydrolysis fluorescence products.