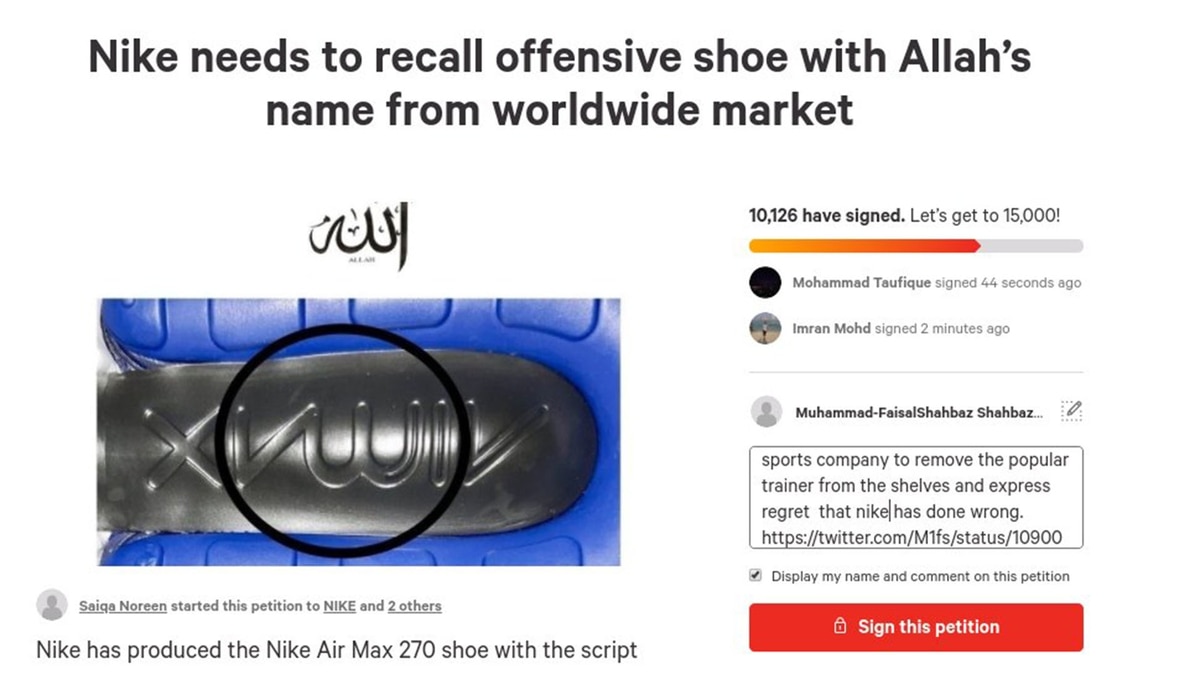 Thousands of people asked Nike remove your shoes Air Max 270 because they considered that the design of the logo is offensive to the Muslims.

A request from Change.org, Which obtained more than 10,000 signatures in two weeks, says the logo is similar to the word "There" (Allah in English).

Saiqa Noreen, who launched the petitionHe wrote that the logo "will surely be trampled, kicked and stained with mud or even dirt." He also demanded the brand "Stricter control of the products before launching them on the market"

"It's outrageous and scary Nike allows the name of God in a shoe. This is disrespectful and extremely offensive for Muslims and insulting for Islam"Noreen said.

A spokesman for Nike told the newspaper "Today" that the logo is a version "Stylized" of the Air Max brand.

The business has added that "Nike respects all religions and take serious care of this nature".

According to the company, they also explained that "It is a stylized representation of brands and any other meaning or representation perceived is not intentional".

The location of the new logo that introduced Nike is on its own and if you put the name back on, then you can see the supposed similarity of the word in English and the Arabic word that is "There", That is God.

This is not the first time that the company faces offensive images accusations, according to "Today." Nike stopped selling a line of shoes in 1997 for a logo in the form of a flame that, according to the critics, was similar to "Allah."

The Council of American-Islamic Relations (CAIR)A Muslim civil rights defense organization has also filed complaints about the Nike logo in the last weeks.

"Several members of the community have contacted us to talk about the design"He told Ibrahim Hooper, director of communications at CAIR today.

Hooper says that this is not the first time that a company has been accused of # 39; Use an Islamic script on your products.

"We have treated several cases over the years. One of the cases that also accused was a jeans manufacturer who added a design, but it turned out to be verses of the Koran in Arabic, "he said.

"They do not necessarily see a problem, they may not even know what it was; It was just a good design for them, but obviously it is completely inappropriate do this kind of thing ".

Complaints against Nike They take a few weeks after that Amazon removed more than a dozen products, Including bath and haired carpets that had references to the prophet Muhammad.

According to the thought of the Muslim culture, show The sole of a shoe is the utmost contempt And it implies that you want to hurt someone with her, as well as that the shoes are dirty in constant contact with the ground.