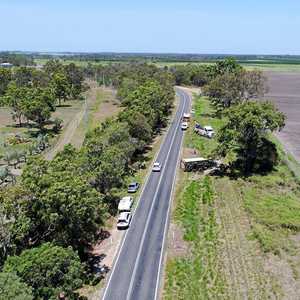 Tomorrow's family damaged at heart will be forgiven by Leigh Purkis and her beautiful young daughter Emerson.

A pair of 16 and 17 people who died in accidents along the deadly Bundaberg-Gin Gin area of ​​44 kilometers from 2001.

In the past five years, nine people have lost their lives. In this period, more than 40 people were seriously injured.

With the South Kolan and Bundaberg communities that are still confronted with the double fatality of last year's horror, RACK and local envoy Stephen Bennet demand action regarding the state of the deadly road.

Mr. Bennet wants to see an investigation of security, while the state body of top motoring calls on state and federal governments to undertake key upgrades.

Lucinda Ross, a spokeswoman for RACK, said Bundaberg-Gin Gin Rd was one of several routes leading to Bundaberg, identified as a medium-to-high risk of impact in the latest AusRAP estimates for the Australian Road, which, cause serious injury, hospitalization or death.

Bundaberg-Miriam Vale Rd, Isis Highway and Goodvood Rd also have a medium-high risk, according to this analysis.

"We call on the state and federal government to enter and deliver low-cost treatments of high benefits in order to make these roads safer," said Mrs Ross.

She said that the implementation of security precautions, such as clearing the obstacles on the road, setting up security barriers, implementing a wide-line treatment on the central line and upgrading intersections, made a big difference.

"These simple but very effective improvements would significantly reduce the risk and severity of the demolition, increasing security for road users," Ms Ross said.

Mr. Bennett said he was more determined than ever to work on maintaining the road.

"Statistics is terrible," he said.

"Any death on our roads is too much.

"We want our families, friends and visitors to be safe."

He said it was necessary to take further action to reduce the level of risk on the road after last week's death.

"I am aware that the investigation is still ongoing, but the need for security is still needed, looking at the whole path," Bennett said.

In the initial response to the questions on the state of affairs on the road, the department stated that it had recently performed a routine inspection and did not find any part requiring immediate action.

They also said in response to the concerns of the g. Ratcliffe.

In response to the call RACK and Mr. Bennett for action, spokesman said yesterday that the department "explored potential improvements on the way to Bundaberg-Gin Gin Rd".

The spokesman also said that if it is established that some factors on the road have been involved in last week's double fatalities, the department will act to address them.

There were five deaths at Bundaberg-Gin Gin Rd and at least 40 accidents that caused serious injury or hospitalization between 2013-2017, revealed RACK's latest AusRAP rating.

The latest deaths were the mother of South Carolina and daughter Leiza and Emerson Purkis, who drove to school in the morning when their car hit a truck last Monday.

Leisa, 46, died on the spot and Emerson, 12, was taken to the hospital in critical condition, but died of injuries later that day.

An investigation into what caused the disaster is still ongoing.

Patricia Levi, a dedicated 65-year-old grandmother who wanted to meet her second grandson, is a daily Bundaberg-Gin Gin Rd for 30 years.

Ms. Levi's car collided with a vehicle driven by a 58-year-old woman, South Kollan Kailen Carter. It was a terrible blow with his head, who killed both of them.

Mundubber's man James "Jim" Robertson is described as "the land as the earth is coming."

He tried to cross the Bundaberg-Gin Gin Rd after he left the South Kolan hotel when he was hit by a sedan, which had a critical injury.

He died on the scene.

A 28-year-old died after his car left the road and hit a tree.

Travis Herschell, 28, lost his life after his consolation hit the second car that drove on the wrong side of the road.

The driver of the second vehicle, 19-year-old Dilan Jade Cooper, was sentenced to 18 months in prison after pleading guilty to the dangerous operations of a motor vehicle causing death.

Since his death, an annual match between the Hokkaido and Western Bundabergs fought for the Shield Travis Herschell.

Fa & # 39; liaia Brovn, a student driver who just got her own set of wheels, was on her way home from the Gin Jin market with her father when she was driving too close to the road and lost control.

The car rolled and landed on the roof in a nearby gully. The impact captured Fa & # 39; s license between the steering wheel and the car deck.

Her father tirelessly struggled to free himself while he was watching an overloaded car filled with water, but tragically, Fa & # 39; lia drowned.

The NevsMail he could not find the details of the ninth death.