My kitchen rules: the pair of Perth, Karito and Ian, are blocked and burned in the instant restaurant of MKR 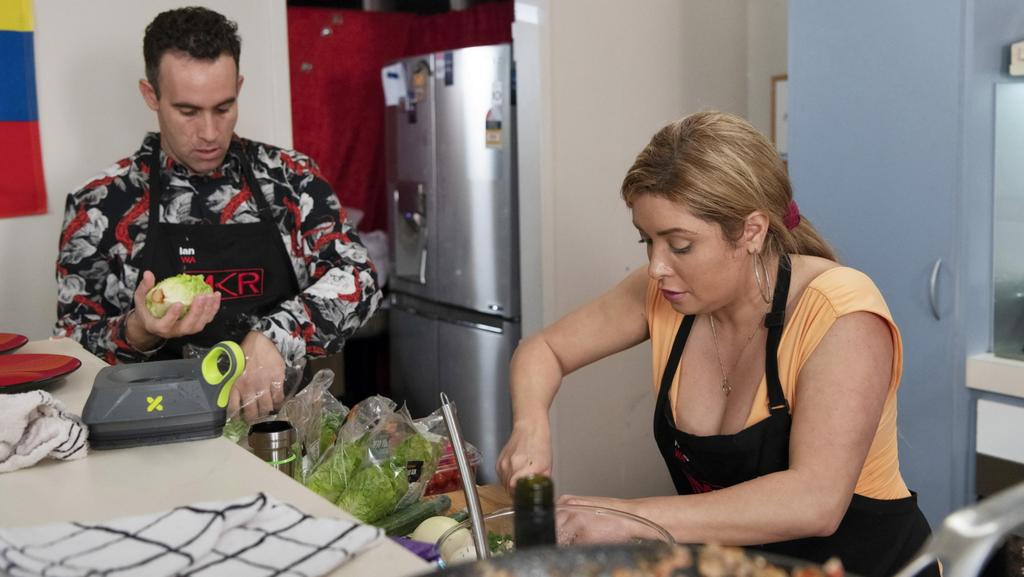 They wanted to use the Colombian fire with their first Cook-up of my cooking rules.

But Karito and Ian crashed and burned during their instant disaster restaurant Wednesday night.

The couple scored a group of 38 out of 130 for their three-course menu: a world away from 96, scored by the couple from Perth, Amanda and Blake the previous night.

Karito wanted to exhibit his South American heritage with the menu, which began with stuffed poppy, a spicy ball and deep potato.

Pete Evans scored the plate five and Manu Feildel at six, with the two judges commenting that the ratios were outside.

"The own potato is generous, gilded, crispy, but there is a little more potato compared to filling," said Feildel.

"Filling it, it's good, but suddenly a lot of potato is left … It's a welcoming and very nice recipe, but it could have been a bit better.

Evans added that Karito would not have been diverted from the tradition to the presentation.

"I think they make fun of me, I really do it, because I want to experience real Colombian food and I just have to ask why you decided to make three balls on a plate instead of the larger traditional one," he said.

"Forget the presentation. At this stage we do not care what it looks like. Give us your authentic food."

The next was the bean stew with banana, which seemed to send the WA duo down, cleaning only two and three Evans and Feildel, respectively.

The two said that the dish did not taste and "disappointing".

"I think the expectation was so high that it would take us to Colombia," said Feildel.

"I do not think we have arrived unfortunately … there is no doubt that there is a passion for your veins, but you need to take it with your plate."

Andy Andy, who also comes from South America, was bitten by the Karito sentimental recipe.

"Maybe it's his family, you know that the mother does not have the palate," he said.

In a piece of the camera, Blake said that the Peruvian food blogger had gone too far.

"Andy is wild. You never talk about the family of someone with your kitchen," he said.

Dessert was the largest flop of all, with Ian's liman seed that was not established and was used in liquid form.

"The flavor intensifies a lot, like drinking a condensed can."

Evans added: "I can not say much about these desserts. It's disagreeable. Every night for you. People at home sit there and think that" I can do it better "until they enter the kitchen."

The judges gave a unique point on the plate. Combined with computer scores, the total of 38 of the 130 Karito and Ian sites at the end of the ranking.