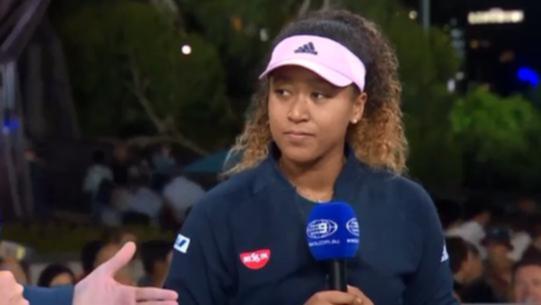 Tony Jones has been harassed on social networks so it's described as a "patronizing" and "embarrassing" interview with Open Australian Open champion Naomi Osaka.

Jones, who headed channel 9 coverage for the female final on Saturday night, was attacked as "terrible" and "cruel".

Osaka, 21, walked from Rod Laver Arena to Channel 9, next to Margaret Court Arena, with the Daphne Akhurst Memorial Cup in hand after his second major Slam win in six months, just because Jones I said I was not "sure how you did it all this way."

Watch the interview with the player above

As Osaka sought an uncomfortable response, he exclaimed "There's the smile."

He then asked Osaka how he planned to spend his control of $ 4.1 million, stating that "we would love to pump this back into the economy," and that he was criticized on Twitter to handle a question about the heritage of Osaka.

"Your grandparents go back to Japan and you have left Japan in three and you still consider yourself a Japanese player," he said.

"It took some time for your grandparents that you and your sisters wanted to play tennis and finally arrived on board."

As he crossed the break, Jones was hit harder to say that the "mixed singles" would be prepared below.

The game to follow was the mixed final of doubles, with the Australians Astra Sharma and John-Patrick Smith.