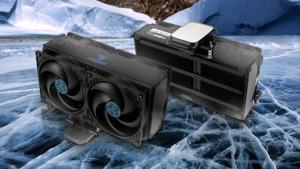 It was in December 2019 when we first reported on the IceGiant ProSiphon Elite and therefore on a possibly innovative refrigerator. The giant radiator cooler promises nothing less than a cooling revolution, especially with a view to HEDT processors (HEDT – High-End Desktop). However, sales initially scheduled for spring 2020 could not be held. But now the IceGiant ProSiphon Elite has finally hit the market.

Unlike a classic heat pipe, the concept of radiator separates the areas of evaporation and condensation and should therefore remain fully effective even in extreme scenarios (we have already described the principle in more detail in our first news). However, the refrigerant circulates independently using physical principles, so no pump is needed. Compared to AiO cooling, this reduces complexity, increases service life, and at the same time turns off a (often especially annoying) sound source.

Visually, the ProSiphon Elite could almost be confused with a 240mm radius, were it not for the mounting solution for the AMD AM4, TR4 and sTRX4 sockets (even Threadripper is supported) and for the Intel LGA 1200 sockets, 115x, 1366, 2011 (-3) and 2066 at the bottom. RAM modules located under the refrigerator cannot exceed 48 mm in height. The structure of the aluminum cooling fins has vertical cooling fins, the three condensation zones are visibly horizontal. Four 120 mm fans in push-pull configuration are mounted in the refrigerator. These PWM fans run at a maximum of 2,300 rpm.

The structure already suggests that the ProSiphon Elite effortlessly exceeds the dimensions of classic air coolers. With four fans, it measures huge 251 x 164 x 129.4 mm (W x H x D). The weight of the fans is 2 kg. The refrigerator is delivered with a Thermal Grizzly Kryonaut dosing syringe. However, it is not suitable for use with liquid metal because it is made entirely of aluminum. It should also be considered that the cooler makes it necessary to rethink the air flow of the box. Although typical air coolers are designed for horizontal airflow, the ProSiphon Elite benefits from vertical airflow. Therefore, the manufacturer recommends the use of lid fans.

We’d like to show you a YouTube video right now. The protection of your data is important to us: YouTube sets cookies on your computer by embedding and playing them, with which you may be tracked. If you want to allow it, just click the play button. The video will be uploaded and played.

The giant radiator cooler is now available at Caseking. It costs 184.90 euros. IceGiant ends up in the high-end 360mm AiO refrigeration price range. The manufacturer upholds the promise of a long service life with a ten-year warranty.