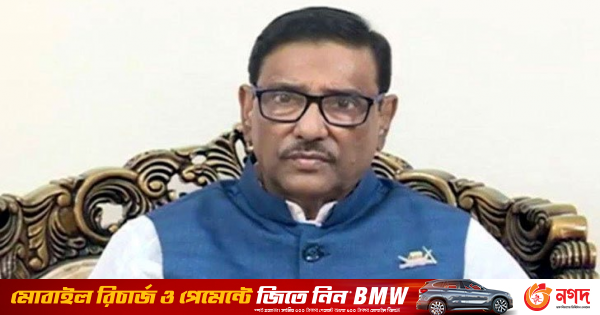 Awami League General Secretary Obaidul Quader welcomed the announcement of the BNP program on the occasion of March 7th. He said those who had banned the historic March 7 for so long will watch it now, adding that the Awami League welcomed the BNP’s decision.

He thinks this BNP effort will create a positive atmosphere in the country’s political environment.

Obaidul Quader made the remarks at a panel discussion on the occasion of the founding anniversary of Sheikh Russell’s National Council for Children and Adolescents in the auditorium of the capital’s Krishibid Institute on Thursday morning.

He joined the ceremony via video conference from his official residence.

Obaidul Quader urged the youth to know the correct history of the country and the war of liberation.

Referring to the Bangabandhu family as a symbol of honesty, talent and courage in Bangladesh politics, Awami League general secretary said members of the Sheikh Russell National Children and Adolescent Council will create golden people in the future to build the golden bengal of Bangabandhu dream.

Referring to Bangabandhu, Independence, Bangladesh in a source, Obaidul Quader said, “Everyone, Bangabandhu, inaugurating him to the seat of dignity means respecting the values ​​of the country and independence.”

He said Bangabandhu has given an independent state, a geographical emancipation, while his worthy daughter Sheikh Hasina has given an economic emancipation and a model to follow to reduce hunger and poverty reduction.

He called on children to become worthy citizens if Sheikh Hasina’s dream of turning the country into a prosperous country in 2041 is to be achieved.

Bangabandhu and Sheikh Hasina will be the models of the new generation, models to follow, we must move forward remembering them.