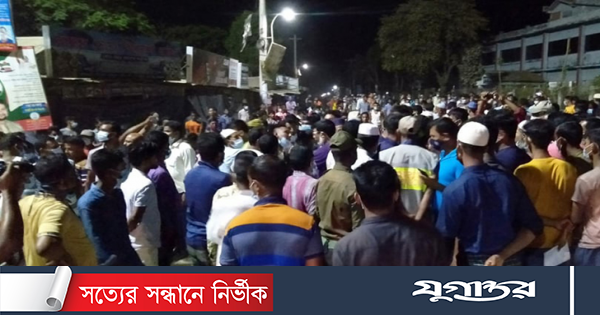 In Kuakata, the UN was attacked for enforcing directives announced by the government. At the time, the UN was blocked along with the vehicle.

In this incident, local people chased and fought with the police. Subsequently, the UN was liberated with the help of the police.

The incident started around 20:15 on Monday night and a police team led by the OC of the Mahipur police station rushed to the situation. Meanwhile, the UN claimed that the Kuakata Tourist Police Office, blocked with the help of police, was forced to take refuge.

In a tense situation, Kuakata Mayor Anwar Hawlader and Kuakata Press Club President Nasir Uddin Biplob tried to keep the public at odds with police. Later, around nine o’clock at night, the situation came under the control of the police.

Witnesses said Kalapara Upazila Nirbahi’s officer, Abu Hasnat Mohammad Shahidul Haque, urged traders and pedestrians to return home to follow the strict guidelines announced by the government. At the time, the UN wanted to know the identity of a young man named Ilias by stopping him on a motorcycle with a newspaper sticker (Talash) at the Kuakata junction.

At the same time, the young man was agitated when the UN mentioned the recent arrest of Elias along with Yaba. Witnesses said Elias was beaten by the UN. When the news broke, about two hundred photographers engaged in photographing tourists on Kuakata beach arrived at the crossroads and chased protesters and police.

Elias said in this context, when I got to the Kuakata crossroads, the UN stopped my bike and started hitting me as soon as I wanted to know my identity. However, no one but Elias was seriously injured in the incident.

OC Moniruzzaman, a Mahipur police station, denied any involvement in the chase and told Jugantar, “After receiving the news, we went to the scene and asked the agitated people to return home. They returned.” At present, normalcy prevails.

UN spokesman Abu Hasnat Mohammad Shahidul Haque said: “I was outraged when I went to run a mobile court to obstruct the work of the government.”