Acquired by a French investor in 2020, the Belgian company took the opportunity to expand its sources of revenue, beyond the meager margins it generates on iPhones and Macs. But some customers lament the way certain types of store memberships are sold. The boss explains but acknowledges the “excesses.”

As we know, the world of distribution has been under pressure for several years. One of the sectors most affected is the sale of small, easy-to-deliver electronic devices. Competition with e-commerce is fierce. Switch, which is the largest chain of ‘Apple Premium Resellers’ in Belgium, is among the victims. These stores are the top “authorized resellers” of the famous American brand that sell iPhones and Macs. In a few years, profits melted down and unhappy alliances were made: debts accumulated.

In 2020, the company was acquired by SFAM, a French company. Good news for Switch, as its boss explains below. But this acquisition also explains the frustration of some customers and the complaint messages they received from RTL news writing in recent weeks. In question: the sale, “forced” according to customers who contacted us, of strange subscriptions.

My son will change the glass of his iPhone, he leaves with two contracts at 44 € / month

“Big scam at the Switch store in Bastion in Tournai. They sell contracts that have absolutely nothing to do with Apple. My stepson will change the protective screen of his iPhone and leave with two contracts, will have to pay 2 x € 44.00 a month or is still a student with no fixed income. Outrageous!“Vanessa wrote to us using the orange Notify Us button.

At the Switch store in Liège (Belle-Ile), Christophe bought an iPhone on December 17th. “The vendors manipulated me for 20 minutes, so in the end I signed three contracts digitally (on an uninfected tablet) and three direct debits were created without being able to read anything again.“Christophe describes. He signed without really knowing it”insurance contracts (Celside), for a privilege card (Cyrana) and for a lifetime website (Hubside)“. Total amount of subscriptions after the first months offered: 115 € / month ! Our witness, who canceled these subscriptions as soon as possible and hopes that you will not be charged, knows that he is to blame: “I shouldn’t have signed, but these forced sales damage the image of the mall and Apple“, he believes: 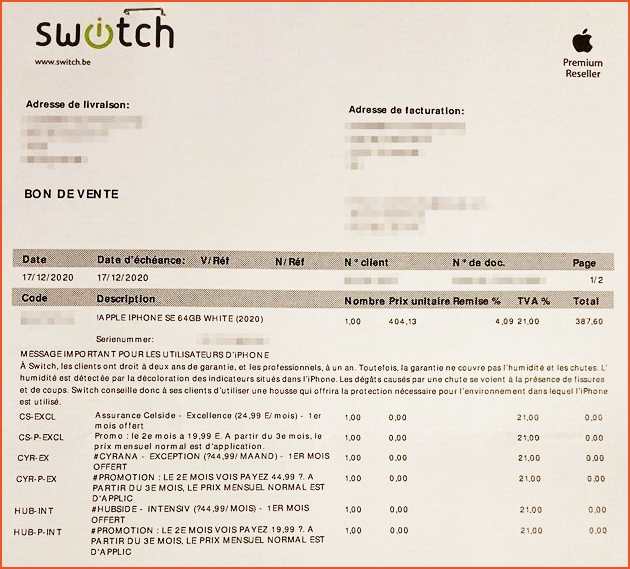 Géraldine commits for € 70 a month without knowing it

A resident of the Brussels region gave us more details about the methods of sale. “I changed the protective glass on my phone at the Switch store in Woluwe-Saint-Lambert. Everything went well. A week later, the store calls me saying I’ve won an external battery, which I can pick up at the store, to thank me for my “purchases”. At the same time, because I was supposedly drawn, he tells me that I am also entitled to a privilege card, completely free, which will return me 30% cash in many online stores. (Brico, Etam, etc.), and I have to take advantage of it considering the next closure“explains this 31-year-old Woluwe resident.

Normally suspicious, Geraldine is persuaded. “When I signed on the tablet, where the contract was not clearly visible, I asked him if I would commit. That’s when he told me he would pay the penalty after the first month for free, but I had 30 days to cancel the one-year subscription. I just had to call by phone or mail“The saleswoman was.”very smart, I was fine“When she gets home, Geraldine asks about Cyrana.”I find out that he gave me the biggest subscription at 45 euros a month, with many options, and that many people complain that he has lost 400 or 500 euros because he forgot to unsubscribe“Our witness did not realize that the signed contract contained a direct debit that allowed Cyrana to withdraw the money each month.”The saleswoman asked me for my account number saying it was for the refund of the cash return“: 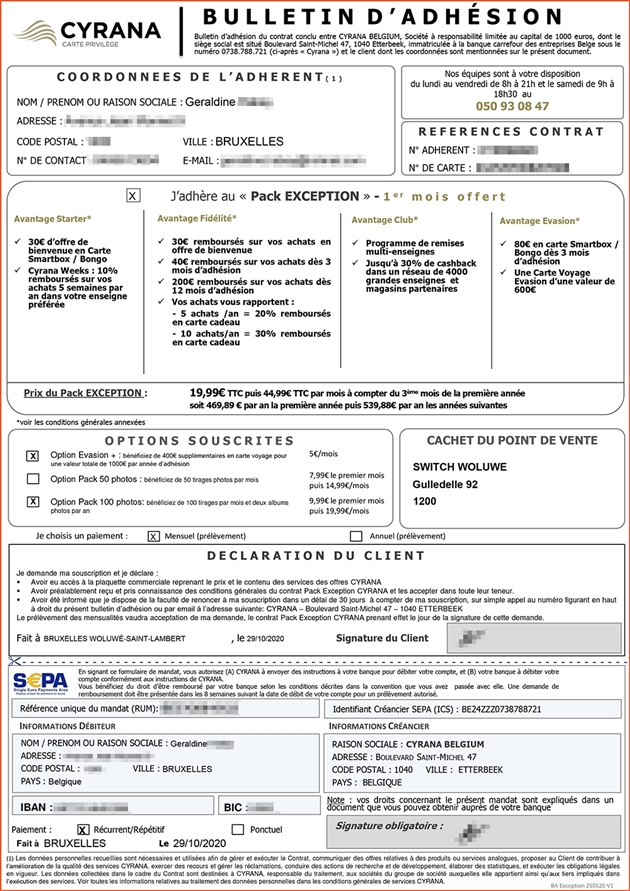 When analyzing the contract signed by Geraldine, we see that the options Evasion (€ 5 per month) and Pack Photos (€ 20 per month) have been added. Total amount of subscriptions signed: € 70 a month!

Our witness called Cyrana’s number, where she was able to terminate her subscriptions. But he also returned to the Switch store. “I was with my husband and made a bit of a fuss at the store. The manager finally agreed to call Cyrana in front of me to confirm the cancellation of the subscription. I wasn’t happy to say it wasn’t a scam“says Geraldine. He thinks it’s a problem in terms of how to present and sign contracts, and why.”users say on social media that they never receive cashInformation that we were unable to verify.

What do Switch stores say?

We contacted what remained the head of Switch stores despite the inauguration, Thierry Janssen. Confirm that “2020 has been a year full of efforts. Switch was in financial difficulties and placed in a tender procedure. The court of the Antwerp company awarded the company to a buyer, which is a French group, SFAM, which became the main and sole shareholder of the company Switch“A solution that made it possible.”save around 230 jobs“, although “we went from 28 to 21 stores“.

SFAM has been active for many years in … insurance for smartphones and mobile products. An activity that has become visibly so profitable that it has made it possible to buy shops that are precisely the best place to convince someone to take out insurance. In fact, these insurance products (which exist under the trade name of Celside in Belgium) can only be subscribed through “distributors” such as the Switch stores in this case. But SFAM is also behind the monthly subscriptions Cyran i Hubside, which have nothing to do with the world of insurance. Cyrana is a “privilege” purchase card in the form of cash refunds and discount coupons; Hubside is a model-based DIY website.

Was the acquisition, therefore, accompanied by an obligation to (offer) the sale of SFAM services? “First of all, you should know that if the Switch company was in bankruptcy proceedings, it is not for nothing. We are an APR, an Apple Premium reseller. We are a mini Apple Store, so Apple wants the customer experience to be at a certain level. We’re also single-brand: we only sell Apple products, unlike MediaMarkt, for example, which sells everything“This concept has one big flaw: the margins of Apple products are low and you need nice stores in nice places.”Therefore, we are doomed to look for additional margins in accessories or screen savers“, and elsewhere”.The buyer (Sfam) he was told, and I share his view, that we should sell more services to dress a product“.

Therefore, this explains the sales proposals of insurance, privilege cards and personal websites. Thierry Janssen believes that these proposals make sense to the client, although he admits that some are not all for everyone.

Brochures received by a witness after signing (© RTL INFO)

Honest and transparent, the Belgian leader also recognizes certain problems in business practices. He attributes them to the fact that during the reopening, in mid-May 2020, in the midst of the closure “,there were staff in our stores who were not absolutely trained because we were receiving reinforcements from France“These were employees.”who knew SFAM products, but not Apple products“The head of Switch stores is clear:”I’m not going to give a damn, there have been drifts in business behavior“He intends to remedy it.”through training given to staff and even mystery shoppers“because he realizes it”these derivations occur in a Switch store, even if it is not a Switch product, and are collateral damage in terms of image“.

As for subscriptions, which some consider scams, “is new to us and we will ask sellers to introduce the product, but not to encourage the sale of a privilege card to an 80-year-old grandmother who buys an iPhone every 8 years“.

To answer the title question of this article, “Does Switch push its customers to sign unwanted subscriptions?“, the answer must be qualified. Yes, there have been some very questionable sales methods in some stores and the head of Switch promises to fix them. But no, these subscriptions are not scams in the strict sense: even if the interest of the Cyrana privilege card and the Hubside website is highly questionable, that of insurance for smartphones or computers is not.

Finally, let’s not forget that Geraldine and the other witnesses have never been forced to sign and that their contract is written in full with the price and duration of the engagement.

Remember essential: Never sign these subscription agreements when you are physically chatting with a seller. Smart, it can create a kind of psychological pressure that some people find hard to take, which makes them sign anything. Tell him that you will take the contract home to read and analyze it completely and that, if you are well, you will see it again.

In the MR, hyper-president Bouchez is just a façade, the myth of the almighty Georges-Louis is collapsing