Revise the last hours of the transfer window: there is no transfer for Gueye and Carrasco 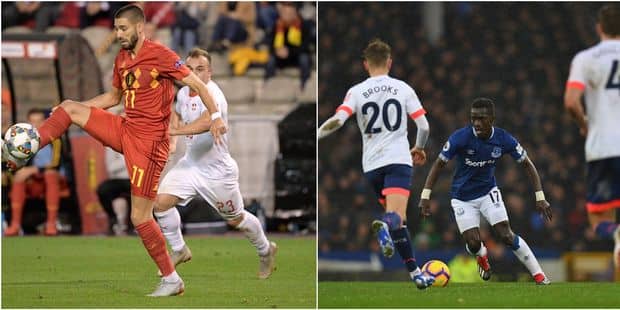 The transfer market closed at midnight. As always, the last hours have been frantic. Live back live!

– 01:30: Fulham registered the transfer of Lazar Markovic (ex-Anderlecht) of Liverpool, in the last minute. This is a definitive transfer.

– 00:55 Willy Semedo and Charleroi is an old story! The contract of the player has been broken and is free to participate wherever you want, whenever you want.

– The time ends for Anderlecht, there is a little less than 24 hours left for the Mauves to finish the attacker's arrival. The Argentine weapons track Facundo Ferreyra (Benfica) having collapsed, the leaders of Brussels remain in another file: eleke, the author of René Weiler! Discover here.

– Still at Parc Astrid, the transfer of Yunus Akgün, mentioned yesterday, would seem in a very bad position. The agreement between Galatasaray and the Mauves would have been rejected by the agent of the 18-year-old Turkish youth. He wanted a commission of a million euros, unthinkable for Anderlecht. According to our sources, Frank Arnesen was furious.

– In the direction of outings, Dauda He is about to sign Speed ​​on a loan, despite the interest of Cádiz and Innsbruck. Abazaj It is close to a loan at Sint-Truiden.

– In Sclessin, the destination of Luyindama It would be linked to that of Maicon. Yesterday, there was a Galatasaray offer for about 9 million to snatch Congolese defender Liege. the cap He would already have an agreement on the basis of a 4-year contract with the Turkish club. The fate of Luyindama depends on a possible exit Maicon, Brazilian defender of the Turkish club, announced that he would go to China or Japan. In case of transfer, Standard is based on Kosanovic and Bokadi to replace it.

– Another Rouche going out, Uche Agbo want to leave more game time. The Nigerian midfielder is coveted in Spain, especially for Rayo Vallecano and Getafe. Both clubs League try to rent it, no option to buy. If no agreement has been found, Agbo probably should not be replaced rouches.

– Charleroi has formalized the arrivals of Ryota Morioka i Younes Delfi. The Japanese attacking midfielder and the young Iranian striker planted the traditional photo with Mehdi Bayat. Morioka is rented with a purchase option set at 1.5 million euros. Charleroi will pay the total salary of the player.

– From the exit to Excel. Yannis Mbombo definitely goes out Hurlus. The striker officially joins the OHL, in D1B. Mouscron is also on the track of an experienced goalkeeper, if Olivier Werner leaves. The transfer market of Hurlus here.

– The ban on the transfer of theAFC Tubize It has risen. His top scorer Thomas Henry left Leuven, the Brabancons still have hours in advance to reinforce their rescue operation on D1B. Tubize has already registered the arrival of an Indonesian promise. Discover here.

– Kingsley Madu the season will end on Roeselare. The left back of Zulte Waregem It has been lent for six months to the D1B club, learned Wednesday on the Roulariens website. Nigeria's contract with Zulte Waregem ends this summer.

– Batshuayi : will it come out, will not it come out? In a coating in Valencia, the main track leads to the former Standardman to Everton. With one condition, Chelsea requires an estimated offer of between 40 and 45 million for the Devils anointer. West Ham is also in situ. More information here.

– Tielemans It is well and really awaited in Leicester today. The midfielder Monegasque could, therefore, revive Premier League ! Find the details here.

– A new teammate for Eden Hazard? Chelsea is interested Abdoulaye Doucouréseconds SkySports. Maurizio Sarri, coach of blues, confirmed at a press conference that he hoped to sign a midfielder this winter. The midfielder of Watford, also coveted by PSG, is not for sale, according to the English club.

– Author of a very good first part of the season, Kenny Lala awakens greed. Sky Italy It evokes a growing interest in Lazio by the lateral defender of Strasbourg. Hard to believe, however, that the Alsatian club agrees to participate with one of its best elements a few hours from the end of the winter market.

– Unless you surprise the last minute, the transfer window of theInter Milan It is closed, according to the Italian press. Despite his wishes elsewhere, Ivan Perisic (formerly Roeselare, Bruges) and Miranda it should have remained nerazzurri. A tough blow for Arsenal he was suffering to attract the Croatian to London.

– The loan of Carlos Vinicius It has been officially launched at La Roca. The Brazilian striker belongs to Naples and played in Portugal, Rio Ave. Georges-Kévin Nkoudou, Tottenham's end, you must join Monaco in the form of a loan also in the day. The midfielder Monegasque, Youssef Ait-Benasser you must provide Saint-Étienne.

– A visible pump in the transfer market? Neymar injured and not available for two and a half months, PSG could issue a bid to boot Willian Chelsea, according to a reporter of SkySports. PSG is still not satisfied with the arrival of Leandro Paredes and continues to fight with Everton for the transfer ofIdrissa Gueye.

– The situation of Yannick Carrasco It is not yet safe, within hours of the closing of the transfer window. Initially they were opposed to an exit, Dalian Yifang's leaders have doubled their position and are willing to release the devil in case of a good offer on the table. Arsenal and AC Milan are still well placed to try to welcome Ixellois on loan.

– Mitroglou arrives to Galatasaray. According to the entire French press, the Greek goleador will be given 18 months to the Turkish club, who will pay the full salary. OM striker must pass his medical visit in the next few hours. The Gala officially confirmed the start of the negotiations with the Olympic club.