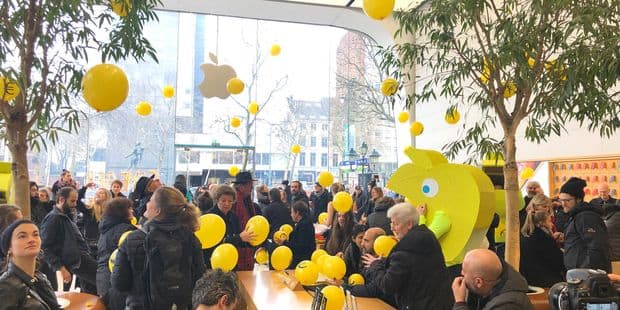 One hundred people, including members of "angry, elderly" groups, participated on Saturday afternoon a flashmob organized at the Apple store in Brussels.

The participants flooded the shop with balloons decorated with dollars to report the gifts of taxes to the multinational.

Outside of nothing, hundreds of swollen balloons were sent to the inside of the store by activists. Some people dressed in pacman have entered the store to swallow dollars, like the video game. The "Game over" graffiti is written in the windows.

"If Apple paid its taxes at the current rate in Belgium, or 33.99%, it would have paid since 2002 a further 500 million. It is equivalent to the salary of 10,000 nurses for one year," they said they said the activists

When the police arrived, the actors went to the ground. The police closed the tickets and everyone, including customers, had to present their identity card before leaving.

This is not the first organized flashmob. Last April, it was a McDonald who had been an action scenario, and the previous year at the Ikea store in Anderlecht.