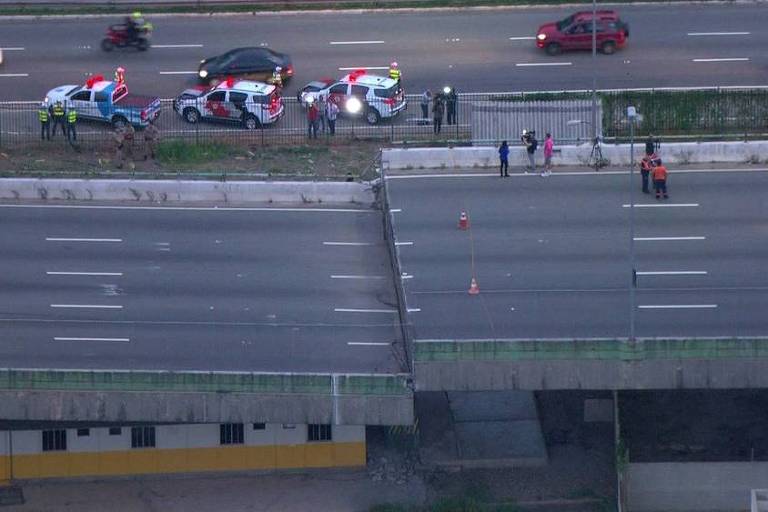 The viaduct on the express track of the marginal Pinheiros, 500 meters from the Jaguar Bridge in the direction of Castello Branco, in the early hours of this Thursday (15th) in Sao Paolo brought about two meters, which led to the prohibition of the road and long lines that could take the next few days .

The runway was completely blocked about Thursday morning at the beginning of the Republican holiday and should remain until at least Tuesday (20th), the black day of consciousness, the last prolonged vacation.

There is no possibility of a full reopening even after that. According to the management of Bruno Covasa (PSDB), studies and works on shorthinas will be made in the period to assess the situation.

The ban, at least partially, is likely to go beyond the holidays, which implies the main traffic complications of Wednesday (21).

Covas says he works with expectation of a partial release of the Express tape after the first intervention activities in the coming days.

Marginal Pinheiros is the second busiest road in Sao Paulo, behind Tietes, connecting the city with various roads and roads. In just one hour, at the peak of traffic, 13,000 vehicles pass through eight lanes, including a local lane. Five of these tape is now banned.

On a regular day, 450,000 vehicles travel in both directions from marginal Pinheiros.

The overpass passing through the traces of the CPTM 9-emerald line. The city is the route to access the Castello Branco motorway and next to the shopping center and Villa Lobos.

Management Covas still does not know the reasons that led to collapse of the structure – cracks appeared. The mayor says there is no indication that the construction could slow down.

Although he was not on the list of bridges and viaducts that require more urgent reforms in the city, experts List estimate that a strict maintenance program would probably prevent this.

The ban caused the congestion of miles in the margin, with rows that reached Av. Professor Frederico Hermann Junior, between the bridges Eusebio Matoso and Cidade Universitaria.

"As far as traffic is concerned, major measures have already been taken: the closure of the highway and the use of a local lane. All the neighborhood neighborhoods are being studied in order to correct the flow while prohibited," said Joao Octaviano Machado, Transport Secretary.

A study on over-the-air and stationary works began on Thursday. Shaking occurs by placing the tubular metal structures below the collapsed part, which is then set and leveled, and is intended to relieve weight on the carrier.

"Let's wait until the 20th to complete the process of obtaining new support, because now there is an excessive air weight and we finish studying what happened and which will be the engineering work needed to recover the area and return it for the population," Kovas said.

The Mayor stressed that the work was not on the list of 33 bridges and viaducts that, in the city's assessment, require priority intervention.

The public prosecution has accused the prefecture of more than a decade of reforming such structures.

The bidding for recruiting projects and technical reports on these 33 priority points was initiated only on the last day of the 9th – before, it was suspended by the Municipal Court of Audit.

After this phase, it will still be necessary to conclude works contracts.

There were no injuries recorded with seriousness in the demolition of the high at dawn. Some drivers had less bruises.

The system analyst Ronald Andrade, 42, was one of the most original episodes. He had traces on the neck, for the seat belt, and he regretted the pain in his back. Andrade waited about ten hours until the arrival of the winch.

"I was on the edge and suddenly two cars that were in front of me disappeared." At that time I did not understand anything, it suddenly seemed like an armageddon, I crashed with a car, the car hit the ground and the handle exploded. tires, the car gets off and I hit the side wall, "he says.

In addition to the Honda CRV, Ronaldo, four other vehicles collapsed. Only one BMV driver had a clearer injury: reduction of supercilium caused by activation of airbags. "The city did not talk to us. The police told us to look for reports of incidents and to go to court for small claims from three budgets," he said.

See below questions and answers on the preservation and overview of bridges and viaducts in Brazil.

What is the structure of the Brazilian road network?

According to CNT (National Traffic Confederation), there are 1,735,621 km of road network in the country, of which 3% (54,972 km) of bridges or viaducts. There is no official survey to consolidate travel card information for all municipalities.

What kind of problem is common in these structures?

The CNT Road Survey 2017 pointed out that 64% of highways and viaducts do not have a complete protective rail, which exacerbates the risks to users. In 10% of cases there are no two things (neither shoulders or defense). Data relate only to roads and relates to these safety features on the surface of the bridge, without taking into account other structural problems.

Are there rules that determine the rules for inspection, such as periodicity?

Yes, the technical standard 99452/2016 determines the guidelines to be met for concrete structures such as bridges, overpasses and walkways. According to Ciro Araujo, IPT engineer, there are routine inspections by responsible public agencies that rate conservation and include a classification note. They appear to be "most" once a year.

He says that "if the evaluation is good, the deadline for performing a special inspection can be extended," which is happening every five years and more. There are also extraordinary inspections, as happened in 2016 on the Viaduct Santo Amaro, which set off after an accident.

Which diagnosis is made by the federal government?

Dnit (National Ministry of Transport Infrastructure), linked to the Ministry of Transport, now under the management of Michel Temer (MDB), has a program to care about about 8,000 bridges and viaducts under its jurisdiction. The bodies themselves found that 1,712 structures (21%) needed to be adjusted. Of these, 920 are considered priorities.

What will be there?

The goal is to have a work plan for maintaining 372 (from cleaning and painting to recovery of structural elements) in 2018 and to remediation 27 (adapting to new needs, such as increasing load capacity or increasing dimensions).

And the specific situation in the city of Sao Paolo?

In Sao Paulo, the Municipal Secretariat for Urban Infrastructure and Works, now under the management of Bruno Covas (PSDB), says it is conducting periodic surveys on 185 bridges and viaducts. The study on cellulose in 2017 raised the need for maintenance to 33 (18%), but work offers were suspended after collection of adjustments in procedures performed by the TCM (Municipal Court Account).

Who cares about bridges and viaducts in the country?

Determining the monitoring and maintaining the integrity of these structures is the administration responsible for a particular road network. Sao Paolo City Hall is obliged to inspect and repair bridges in the city. The government of each federal unit must monitor works on state highways, while the federal government takes care of those belonging to federal roads.

According to Concep Wilson Lang, there is a negligence. "Information [sobre a necessidade de reparos] Brazil has been there since 2010, waiting for a decision, "he says.

And in the case of roads under concession?

Inspection is a public responsibility and maintenance of a concessionaire. In the case of the Imigrantes Highway, for example, linking Sao Paulo to Baikada Santista is a DER-SP (Roads Department) team that needs to check the risks of its viaducts and bridges. From this assessment, the concessionaire is responsible for carrying out the works.

Engineer Lang cites the Italian case as an example of neglecting concessions. "I had a concessionaire, who had to do it [a manutenção]. But whoever looks, does not look. The state must think that he is whoever has the social responsibility of this disaster. "

Engineer Lang says the diagnosis is consistent with the protocols, as if it were a series of medical diagnoses. "The first is a periodic inspection of an obvious state," so it is more superficial. Based on the report on this visit, there may be a need for a particular action. "A specialist in the" pathology of structures "exerts expertise and indicates what the executive should do, but he can not predict how long there may be a serious problem, but only determines whether there is urgency." Therefore, the executive body is obliged to perform the necessary work, prohibition or reinforcement.

What are these structures influencing these wear?

Unlike buildings, by nature, bridges and viaducts move. Movement can be vertical or horizontal. It appears vertically at the entrance to an expressive amount of weight in the structure, like a 40-ton truck. Horizontal is given by the traffic of that weight through the structure, creating the movement "Come and Go". This is one of the reasons why a bridge or overpass with a certain extension is made from a module rather than a part. If the structure was individually, the movement would quickly create cracks and put it at risk.

What are the factors and signs wear

Physicians are a clear sign of the problem. Infiltrations are another. "Water is a deadly enemy of structures, because it begins corrosion," says Lang. Jar between the two parts of the bridge is one of them. "Expansion joints also work as a warning. If there is a void, that part should usually be lifted," he says.