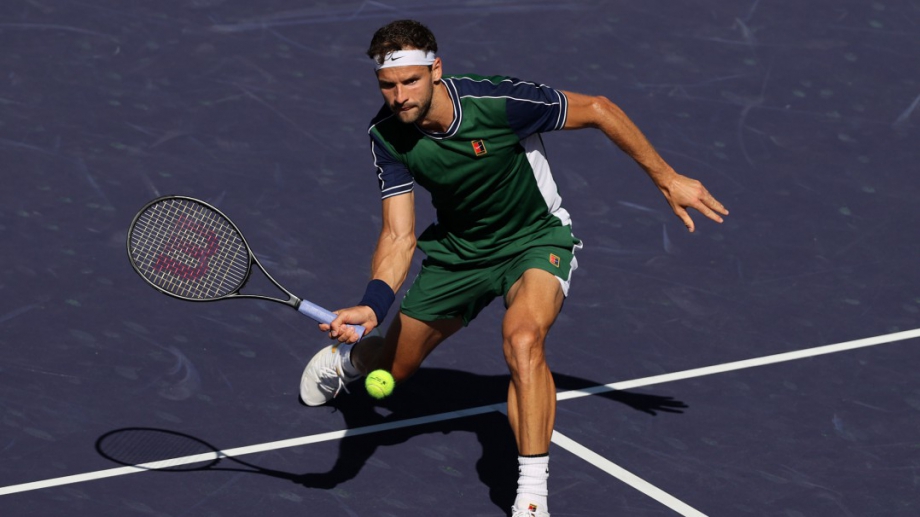 The best Bulgarian tennis player Grigor Dimitrov he was unable to cope with the fatigue and piles of mistakes he made in the semifinals of the Indian Wells Masters tournament, and was eliminated in the semifinals after a landslide defeat to Cameron Nori with 2: 6, 4 : 6 in the first game of the day.

Although there was a day off after two very difficult consecutive games against Medvedev and Hurkach, Dimitrov was not at the known level this week and performed well below expectations. In addition, the Bulgarian was betrayed by his strongest weapons: first-hand and service.

He allowed 3 advances in the first set, until in turn he reached only 1, and Nori allowed no surprises and did not give Dimitrov a chance to turn, even after the advance, achieved by 2: 4.

Up to 28 unprovoked errors were seen by spectators for Dimitrov, and up to 14 were first-hand. He still won the battle of the winners (16:10), but that was not enough against the British stable.

DEVELOPMENT FOR THE DUEL

The two tennis players are on the court and getting ready to start the match.

0: 1 (advance) – Dimitrov opened the game with a double foul, and overcame the setback during 0:30. There was some luck for Dimitrov, who at 15:30 was “saved” by Nori, who easily launched a direct attack into the net. the diagonal, and then finished with a first right on the right, but with a good backhand attack, Nori equalized. He was then followed by a fantastic close-up with a parable for the British for the first point of advance. Grisso spent the match after a cut in the net.

0: 3 (advance) – Dimitrov’s unrecognizable play continued. He made many mistakes and in his second chance to break Nori again took a clear advantage in favor of the debutant in the semifinals at Indian Wells.

1: 4 – With several attractive performances, including two nets on the net, Grisho finally scored in the seventh, winning a game at 15.

2: 4 (advance) – With a fantastic game, two winners and a perfect defense, Dimitrov made his first advance, to 0!

2: 5 (advance) – At 30:30, Grigor tried an attractive performance and made a setback by jumping to the baseline while running towards the ball. Impressive as it was, the shot came out and then he made another mistake and passed the match.

0: 1 (advance) – Dimitrov allowed to reach a new point of advance in favor of Nori at 30:40, but managed to save himself after a fantastic pass shot, impossible by the will of the British. At the next point, Dimitrov made a mistake with a new breaking point, which was reflected even more strongly with a brutal right on the diagonal. It followed a new error not caused by Grisho and a third chance to advance, but for the third time he was saved with a winner.

However, the match continued at the same pace and another unprovoked error gave the Briton a fourth chance to break. This time there was no salvation: a setback in the Bulgarian’s net and an early advance for the British.

0: 2 – Although difficult, Nori won his pass and consolidated the lead.

1: 2 – Dimitrov did not allow to reach the situation from the first set and managed to take his pass to 30, although he again gave two points to his rival.

1: 3 – Haskovo won a marathon of 33 shots at 15:30 and reached the first point to get a favorable lead in the match at 30:40, but his passing shot came out with a bit of a start. Unfortunately, for the Bulgarian, in the next few minutes his direct hand betrayed him and Nori won the match.

2: 3 – Thanks to Nori’s weak performances, Dimitrov managed to get out of a difficult new situation and won his pass.

3: 5 – Dimitrov arrived at 30:30 on Nori’s next pass, but the Briton recorded an excellent counterattack that led to an advance in the game. He followed the untrue “traditional” mistake in this match and Nori won his pass.

Grisso has a series of two more than impressive turns against many quality tennis players: Daniil Medvedev (who is number 2 in the world) and Hubert Hurkach. He is now facing a serious new test, although it is easier on paper.

This is Cameron Nori, who is the best ranked tennis player left in the tournament. One of the most important factors in this case is how much Dimitrov will physically recover from after the hard and grueling battles.

For the first time in the history of the ATP Masters 1000 tournaments (280 tournaments since 1990) there is no tennis player in the top 25. Apart from Nori and Dimitrov, Nikoloz Basilashvili and Taylor Fritz are in this phase, forming the other semifinal (the first is number 36 in the world and the second, number 39).

Still, it should be noted that each of them defeated a higher level tennis player to get a well deserved place here. Dimitrov defeated players number 2, 12 and 20 in the ranking, Nori with №15 and №19, Basilashvili with number 3 and Fritz with numbers 4, 7 and 14.