In the past few weeks, the social environment in Bulgaria has been especially fueled by a large number of protests. However, the worst deterioration in public tensions in the last few days is not dependent on the protest of pensioners, mothers of children with developmental disabilities and religious beliefs, but in dissatisfaction with the rise in fuel prices, which was particularly felt in October. Although prices have already begun to fall, the protests continue.

The topic of fuel, the price dynamics and the problems of the retail market in our country have become the favorite media in the last few days, and in memory of the governor of GERB, remembering the 2013 protests that took their first cabinet in a dense form.

What happens to oil prices on the international market?

There is no worrying or strange trend in the dynamics of retail fuel prices in Bulgaria. Practically monitors the dynamics of oil prices on the international market. For Europe, the relevant comparison is the price of Brent Oylo, one of the main brands of crude oil traded in the sphere that practically represents the European equivalent of the US Vest Tekas Intermediate. Here's how Brent's oil price dynamics looks at the global spot market from the beginning of the year to the present: 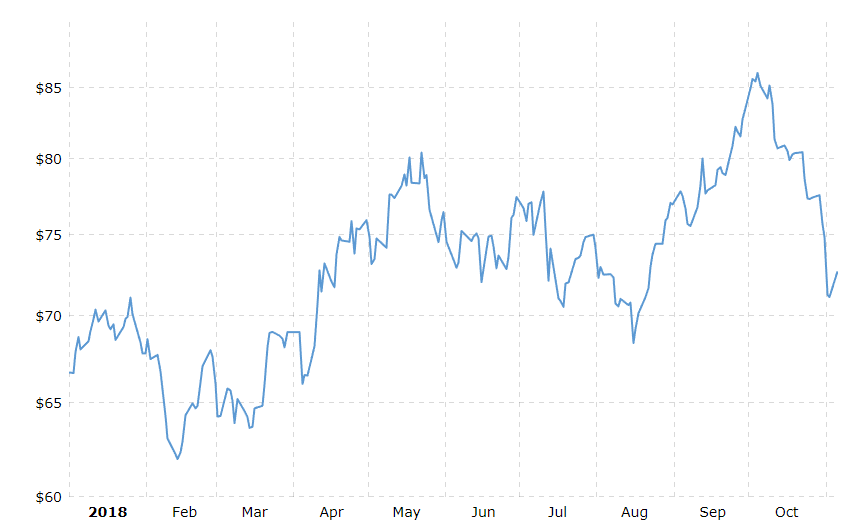 The graph clearly shows two periods of significant price increases this year. The first increase began in early April and peaked in mid-May, after which about a month and a half (from the beginning of June to mid-July) stabilized at the level of about $ 74 to $ 76 (per US dollar) per barrel. Then, it fell to about $ 70 in mid-August, which immediately began to sharply jump to $ 86 at the beginning of October. When it reaches this peak, the price starts to fall. The decline begins on October 10 and lasts until November 2, when it reaches (temporarily?) A bottom of about $ 71. Now, let's look at how fuel prices in Bulgaria are moving in the same period.

What happens to retail prices in Bulgaria?

The second chart shows the dynamics of the price of gasoline A95 in the last year (November 13, 2017 – November 13, 2018). The average value of prices offered by different companies in the retail market in Bulgaria during the specified period is shown. What's in your eyes? Two periods of significant price increases. First, from the end of April (April 26th) to early June (June 11th), retail prices rose from 2.09 leva per liter to 2.26 leva per liter. Then there is a long period of about 3 months until mid-September, when the price remains almost unchanged (except for a slight increase in mid-August). From 18 September to 22 October the price is moving upwards, which increases by more than 10 hundred from 2.27 leva per liter to 2.38 leva. After this point since the beginning of October it started to fall and now it is 2.23 leva per liter.

Similar is the price trend for diesel in the same period. Nothing is different from the comments here – an increase in the price from 2.10 to 2.28 leva per liter from the end of April to the beginning of June, just like in gasoline. Then, about three months there was almost no change in price, followed by a serious increase of 2.30 BGN per liter to 2.42 BGN, starting from September 26 and ending on October 24.

By comparing graphs of the average retail prices of gasoline and diesel fuel in Bulgaria to Brent crude prices in the global market for spots, it becomes clear that they are moving in comparative synchronism. With a slight delay of about 2-3 weeks, when Brenta's price rose, gasoline and diesel prices on the retail market followed this trend. From 6 April to 22 May, the price of crude oil in Brent rose from $ 66.5 to $ 80.4 per barrel. The first significant increase in gas prices is from April 26 to June 11 exactly two or three weeks later. The same goes for autumn, although it is about 3-4 weeks away.

Still – is there a problem with fuel prices?

In any case, the trend is clear – retail prices in Bulgaria are growing after ie the increase in crude oil prices in Brent on the global market and vice versa. In view of the above, charges that fuel fuel in Bulgaria are somewhat "improper" or "non-negotiable" appear to be basically unfounded. Protests against recent price dynamics are rather unjustified. But here it can be argued that, refraining from the very start of prices, their level in Bulgaria is basically excessive and artificially high. This is a different argument that can not relate to the latest price trends. But this is a really important issue, which should also be solved.

All in all, data show that fuel prices in Bulgaria are low. The check from BT showed you that only Romania and Hungary currently have lower prices for gasoline A 95. But an important remark is that this is due to low excise rates in our country. The net price of A95 is 63 cents per liter in Bulgaria, which is more expensive than in 24 EU Member States. In the diesel situation the situation is better – in our country it is cheaper than 11 member states of the trade unions. 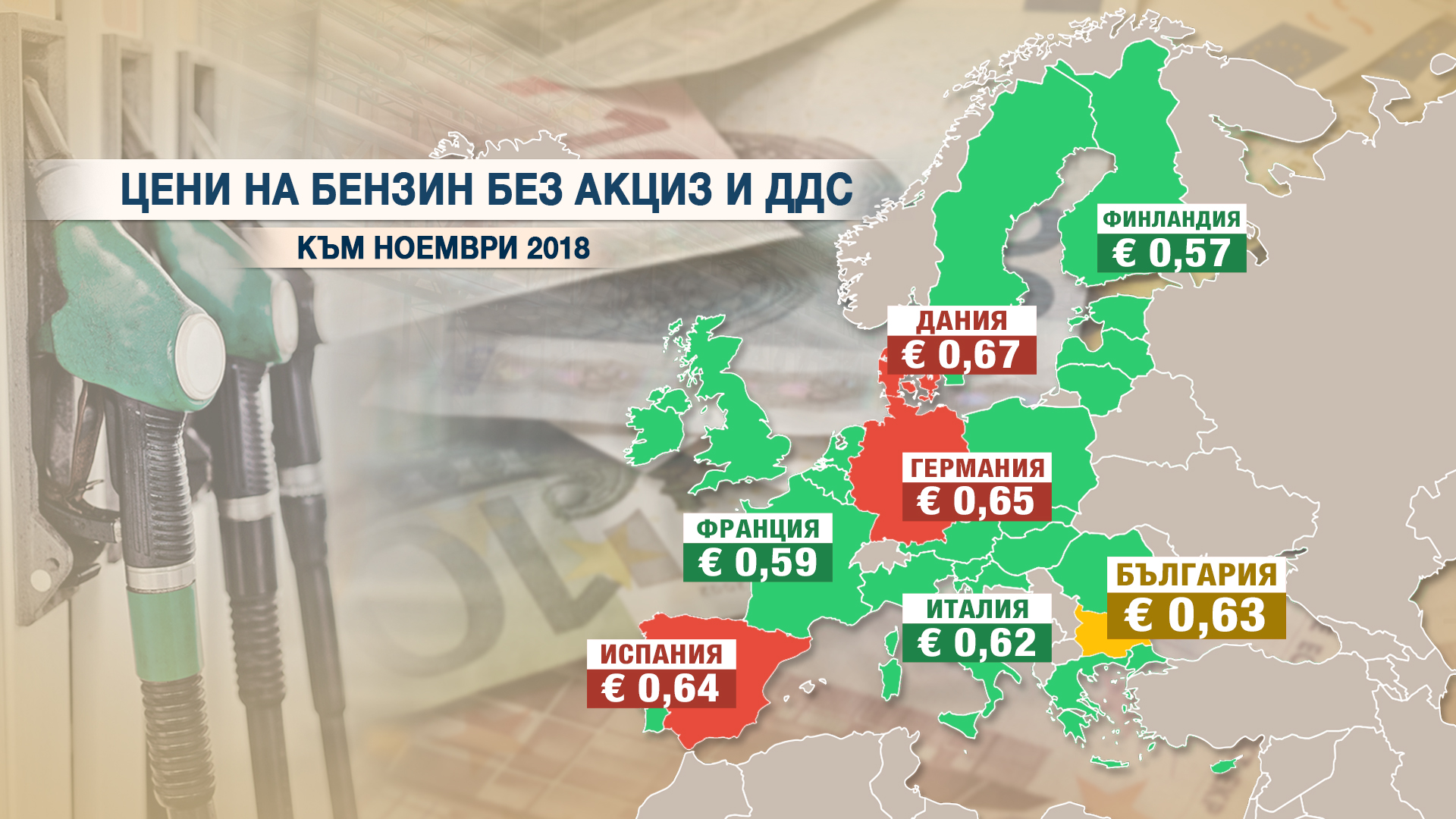 In response to this data, there was comment that this is evidence that there is a problem in the country's fuel market. In particular, there is a problem with the almost monopolistic position of LUKoil, and the lack of competition leads to higher prices. Unfortunately, methods for solving this problem are usually completely inadequate. For example, a recent article appeared that accused the state of supporting Lucy's gain with excise duty to the lowest possible level. And in the article, is it proposed to exclude excise ?!

This is a very strange idea, since such an excise would surely lead to an increase in fuel prices and only aggravate public dissatisfaction. By itself, this would have done much more to LUKoil's competitors than the Russian oil giant itself.

How to fight against the almost monopoly position of LUKoil?

Due to the dominant position in the market, LUKoil's financial position is likely to be much more robust than most competitors. Accordingly, the Russian giant is in a better position to bear additional tax burdens. The increase in costs would rather exacerbate the advantage that LUKoil has more and more concretizes its almost monopolistic position on the market. That's why cExcise is not a solution.

The big problem with the dominant position of LUKoil on the Bulgarian market is due to the fact that the company controls over 80% of the excise warehouses in the country. These are special warehouses that allow the storage of appropriate goods (fuel in this case) under the suspension of excise duty on it. That is, holding goods in an excise warehouse, there is no need to pay excise taxes on it. The idea of ​​these warehouses is generally good, but the problem is that if one of the players in the sector in some way manages to control all or almost all of these warehouses, it can use this position to artificially increase the costs of its competitors and, accordingly, how it would ensure a better position on the market. 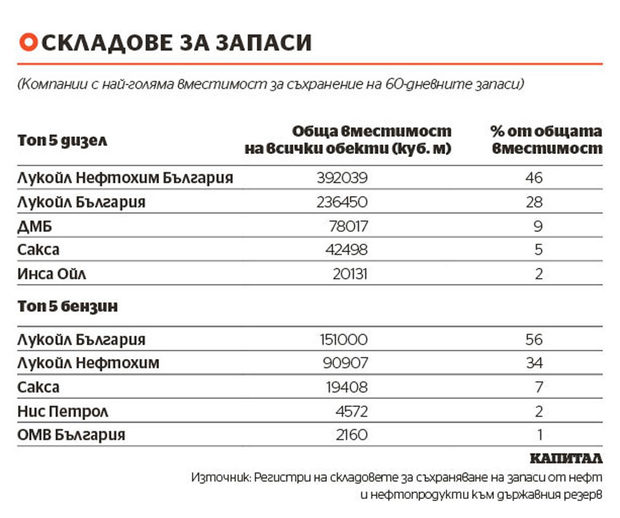 This is happening in Bulgaria with "LUKoil", which, according to the latest data, holds 90% of gasoline stores and 82% of diesel engines. The solution is to end this almost monopoly position. Any other methods would be ineffective, and in particular measures such as raising an excise would most likely have the opposite effect.