Stefan Danailov liked the role of Charles, is in love with Lidia – Anya Pencheva 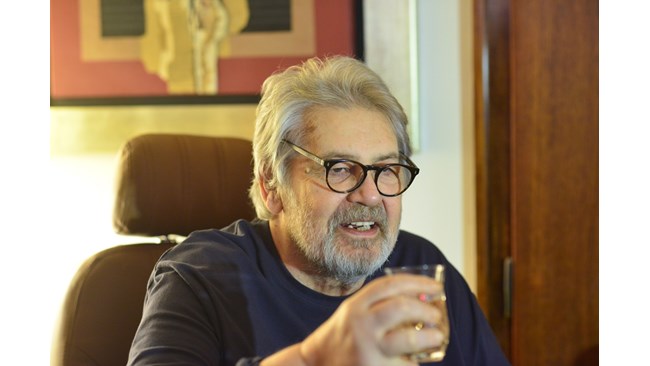 An adult of 30 years is in love with a beautiful (and not so young) actress.

Therefore, in a phrase, the story of "Actress" by English playwright Peter Quyler, with whom Anja Pencheva tries Stefan Danailov to return to the stage, it can be said. And he was tempted …

Yesterday, the house of the great actor brought together the entire composition of the work, known as the Lambo company, and began the first public reading of a work in front of journalists. "Come on, colleagues, we have to sell the goods," jokes the host, sitting dignily in a comfortable chair. With this invitation, he wants to show the writers that the theater is a long process instead of looking at the final result.

wine, and constantly encouraged guests to eat. He did not refuse a glass of his favorite pink wine lately.

Finally, they all sat down at Master's. And he began his monologue as a presentation of the work:

"Around me I have talked about all the time, the noise … about a play with my participation and a group of citizens. And because this front remained a lot – there is not so, people He shouted and decided that maybe there will be. Having found myself mentally well, I made the decision to do this work. She came to me

It turned out that? That there was a role for me! I liked. There was a discrepancy. Annie lived with the idea that it was a comedy (The work explains the last act of an actress – b.a.). In fact, there is a comic plan. But for me, things are much sullen and much more complicated, because getting out of the stage forever is a terrible experience. A very good story.

These three guys (it is directed to the actors that will participate in the show): Ivancho (Panev), Pavel (Ivanov), Nencho (Ilchev) are my former students. The time has come to play a little together. There is something special about this and at least exciting for me.

With my colleague Anya Pencheva it's a lot of fun.

I do not know how to make it old and ugly: the scandal of today woke me up, you're crazy … it will not happen! But we will be smart and beautiful. Because aging, look at me (goes to Anja – b.a.) What beauty makes me old, right? This is what you are waiting for, baby. Sounds bad "Well, it's not a kind boy," says Anya.

(And Stefan Danailov told him he was watching a festival for Miss Baba that day, and he thought it. "Mrs. Annie," she said abruptly, "You want to know where this festival is next year, how can we not win with this monster, "he joked and admitted that it was a small deviation).

A lot of work awaits us, there are crazy ideas in the lead. Rossi is a director (her niece Rositsa Obreshkova, who for 18 years has been her right hand in her work at the National Academy of Theater and Arts of the Cinema – BA) What am I? Producer This position is found in Russian works. (Rosica adds that Stefan is an obedient actor who trusts the director and works with him easily – b.a.).

I still do not know how to play. Am going to go In a car? Those, the youngsters, are defying, but I'm going to play this Charles.

I did not give up on the theater, I got a makeup there, everything. He was thinking where he was going to stay, but Marius (Donkin) called: "Do not play anywhere else. This is the theater. It also has an appointment for the premiere – May 2. Male, male!

"Do you have all the wine in the glasses? Then it ends, good luck, live and healthy, and so on …" his speech ended.

All took the files with the manuscript of the work. They sat next to Mastera, and Rositsa began to read the text. His eyes began to melt: "I have lived with an actress for a lifetime …" she murmured, remembering her mother, Rosita Danailova, who lost her recently.

When the time comes it came out of the scenario

Stefan Danailov made his interpretation of the plot of Peter Quillar's work.

Charles is an old devil. I am a bit exaggerated, a Swiss, a banker, aesthetically in love for 30 years with actress Lydia Martin. She has been chasing for years, but she … she is on her way, like every actress, who did not pay attention. But at that moment in which he surrounds him, his contacts with his ex-husband, a type of Italian prostration, I imagine, appears on the knee man, on his sleeve. There is something funny at the theater because Charles is in another world, but he likes to fall in love and endure. She takes the compromise after finishing her latest show and bringing her bracelets and souvenirs to the make-up shop, going to Switzerland the day before, where the lake, the mountain and the sky will be very good. They ask the theater: you're crazy, where you came out … And she tells you she's tired of lovers, she does not want to pretend every night she wants to be a woman, not an actress, etc.