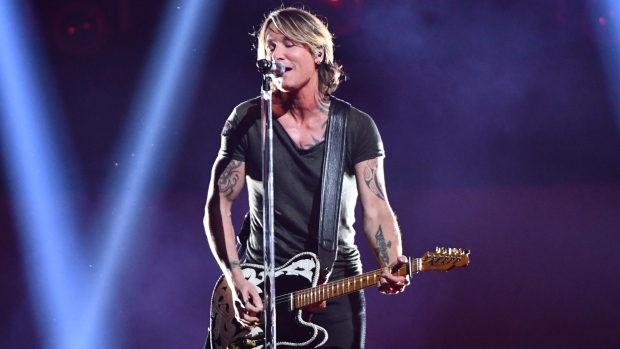 Chris Stapleton won the highest prize in the awards for the state music country in 2018 and had the best performance of this series, almost overflowing the perfect night.

That was until Keith Urban was surprisingly won the main prize – an entertainer of the year – a few moments before the three-hour show ended on Wednesday night.

An Urban Woman Actress, Nicole Kidman, was teary as the singer walked to the stage to collect the prize at the Bridgestone Arena in Nashville, Tennessee.

Urban won the last time an entertainer in 2005 and beat Luke Brian, Jason Aldean and Kenny Chesney for the prize.

"I wish my dad saw this live," the Australian artist said.

Stapleton, however, cleared the house in the CMA, winning four prizes, including a male vocal, a song and a single year.

"I want to thank my children who have come with me that she has gone pretty little and that I would not become a good dad I would always love," said the father of the four and soon be five of his wife, singer – Congressman Morgan Stapleton, is pregnant .

Stapleton also won the performance of the night: His supergroup with Mavis Staples, Maren Morris, Marty Stewart and his wife gave a strong and powerful performance "Friendship", a song by pop star Staples, the late father of the iconic singer. Then they performed "I'll lead you there", disturbing the scene together with the choir. They earned it from overseas.

When Stapleton won only a year – where he previously won both performers and producers, he said he "is thinking about people in California at the moment" and that he wants to "pay this award to them." "

He thought of 12 people who died last week at the Southern California music bar, who were also slow at the top of the show when Garth Brooks held the moment of silence as the victims were shown on the screen.

CMAs, which were broadcast on ABC, also took time to respect those affected by deadly fires in California.

"We agree our love for you," said Carrie Underwood, who also mentioned "brave firemen".

Undervood worked on a triple duty as a co-host, contractor and nominated to the CMA. She was futile when she won the female vocalist of the year.

She kept a positive and elevated theme of the show when she gave the exciting performance of her song "Love Vins." It contains texts: "I believe that you and I are sisters and brothers / I believe that we are made to be here one after the other."

Kacei Musgraves, the only woman nominated for the album of the year, won the Golden Time Award.

"This is really, really crazy time – I moved to Nashville ten years ago today, that's so crazy," she said.

"I'm so proud of it," she said for a pop album inspired by Sade, Bee Gees and others. "It is inspired by this beautiful universe, and you all love the most."

Dan + Shai lost in all four categories in which they were nominated, but impressively performed his hit "Tekuila". When Brothers Osborne won the vocal duo of the year, John Osborne said: "I thought this would go to Dan + Shai."

"I do not know why we continue to conquer this," said John Osbourne when he first came to the scene.

"If this was in Florida, it would definitely be said," added T.J. Osborne, who laughed at the crowd.

Luke Combs, who has the most prominent music album in the country, sang on the scene with a red swing in his hand and won the new artist of the year.

Brooks made a touching new song dedicated to his wife Trisha Iearvood, who was obvious and listened to the song for the first time. The recent Ricki Skaggs family room performed together with Brad Paisley and Urban.

Underwood and Paisley have returned as hosts of the CMA for the 11th time this year, saying a joke at the top of the show, ranging from Lady Gaga and Bradley Cooper to "Star was born" to Underwood's pregnancy.

Underworld apparently discovered a secret about the child, saying that it would be "Villie" after Paisley had repeatedly asked about a half-baby.