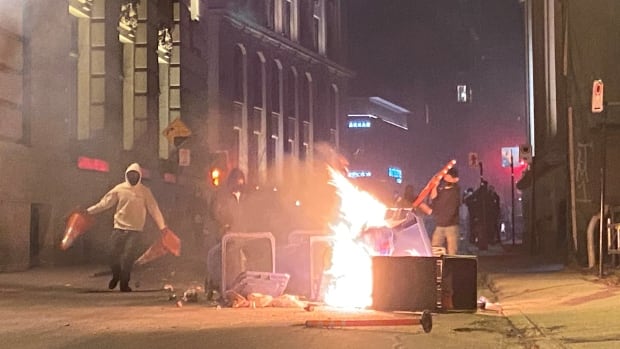 Protesters lit fires and shouted slogans in old Montreal Sunday evening, challenging a new curfew at 8pm that went into effect to prevent the spread of COVID-19 cases.

A large crowd blocked a street near the Place Jacques-Cartier in Montreal. Some lit fires in the trash, while others fired fireworks and chanted slogans ridiculing Prime Minister François Legault and demanding more freedom.

Garbage fires were lit at many intersections and protesters took what they could find on the street and threw it in shop windows, destroying many of it.

Many of the protesters wore no masks.

Dozens of police, some with riot gear, arrived at the scene around 8:30 pm, when some protesters began to disperse.

The provincial government on Tuesday announced the previous curfew. Prime Minister Legault said it was a necessary “preventive” measure to prevent people from gathering inside and prevent an explosion of COVID-19 cases.

On January 9, a curfew was imposed for the first time in all of Quebec, requiring Quebeckers across the province to be at home from 8 a.m. to 5 p.m., unless they had a valid reason. to be out. some regions, including Montreal.