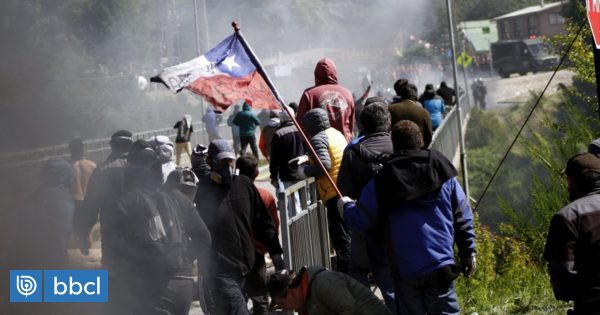 At least one person was injured, after that Mining workers will face the Carabineros GOPE staff, in protest of him not paying your salaries after the closure of the El Toqui zinc mine in the Ayśen region.

In addition, the union president, José Luis Castilla, he was arrested while talking to Radio Bío Bío.

Although one would have been informed eventual solution On behalf of the company Laguna Gold for this Friday, the demonstrators took the Ñirehuao bridge, located on Route 7, in the town of Mañihuales, in Coyhaique.

This agreement was signed this morning by the Mining Seremi of the Aysén region, Julio Züñiga, along with union leaders.

"There is no incentive"

In interview with the program It could be worse, by Radio Bío Bío, el deputy Miguel Calisto (DC) referred to the situation that afflicts the region and, in general, the extreme areas of the country, with respect to centralism.

Thus, the deputy indicated that this morning the Mañihuales routes and the road linking Coyhaique with the Balmaceda Airport were cut short. "We are in a state of alert," he said.

He also indicated that they asked for an office of Interior Minister Andrés Chadwick and President Sebastián Piñera.

The closing of El Toqui, which It affects about 600 families, adds to the close of the Cerro Bayo Minera, which occurred about a year ago, as stated by the Aysenian parliamentarian.

He argued that the Regional Government has been "extremely distant". "The State has a responsibility with the workers, especially because they owe the salaries" in a region where there would be little sustenance.

"We do not have companies, more industries … There are no section policies to boost the economy … No incentive," Calisto concluded.

"We will fight until the end"

At the same time, yesterday the workers of El Toqui formed gangs to safeguard the assets of the company, since yesterday they took place subtraction of mining equipment High cost, says the Aysén Newspaper.

Castilla said that "independent of their state, they are operational and when we are asking for productive continuity, maintaining these equipment is vitally important for our objective (…) We do not want the company to disappear nor does it close, independent of who is responsible. "

"We have information on those who are behind the action or are responsible. What we know is that they could be acting in this way to 'pay' in a certain way, "said the leader.

"They have provoked us to enmity among us. What we have clear is that we will fight to the end to continue working, "concluded the leader in the Aysenian environment.