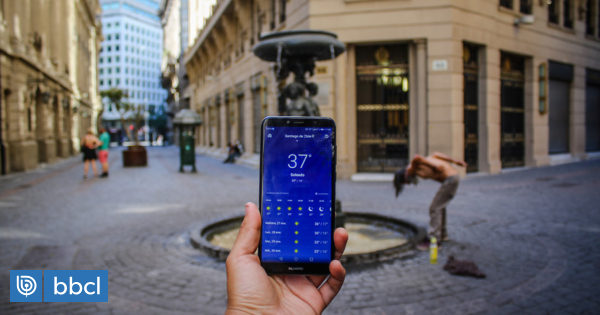 Until this Monday, the heat wave alert for the Chile Meteorological Directorate will be in force, which has made it felt strongly from the region of Coquimbo to Ñuble, with temperatures above 35 degrees.

On Saturday, the historical peak of 40 degrees was recorded in the Valparaíso region and almost 39 degrees in the Metropolitan region.

The last day, "in all the regions will be a lesser degree, although on February 1 we will have an increase in temperatures again. And there are no high temperatures in the central zone," the meteorologist advanced of the Meteorological Directorate of Chile, Edit Amador.

"It is not necessary to expose yourself to the sun. If so, take precautions: moisturize a lot, use appropriate clothing, use any type of hat and all kinds of actions that support better health"

Under this scenario, it is common that high temperatures increase the occurrence of forest fires. In fact, during Sunday, more than 80 incidents were registered, where the most important occurred in the regions of Valparaíso and the Bío Bío.

"We had a Preventive Early Warning for high temperatures, where we have so far had a large amount of fires. However, we have been having a slight minor occurrence of fires in relation to the previous seasons" , stressed the manager of protection against forest fires of Conaf, Aida Baldini.

In the meantime, for this Monday, it expects a maximum temperature of 34 degrees in the Metropolitan region. The director of Onemi at RM, Miguel Muñoz, gave recommendations to protect themselves from high temperatures, such as "not exposing themselves to the sun. And if so, take precautions: moisturize a lot, use the Proper clothing, use any type of hat and all kinds of actions that support better health. "

However, the heat wave will remain during this day, although – in any case – in the following days it is expected that the maximum temperatures will only lower to 30 and 31 degrees in the central zone.