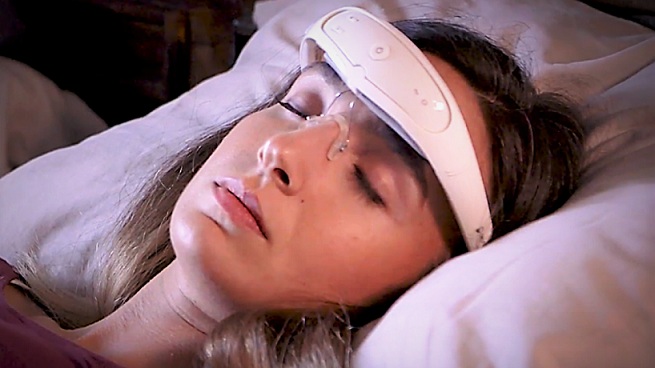 Jewish and Mexican Link Israel.- It is portable and can be used at any time. Thanks to its system, it will offer an alternative without a prescription to the pill or the surgery.

14 percent of adults in the United States suffer from migraines or severe headaches. Among women between 18 and 44, the figure reaches 23 percent. There is still no cure for migraines and medicines without a prescription for pain do not always work.

One of the most promising treatments is the occipital nerve stimulation, where a small generator is implanted at the base of the skull and sends electrical impulses to the brain to mitigate the pain.

What would happen if we could achieve this same effect without surgery and with a cost lower than the thousands of dollars that costs the implantation in the occipital nerve? This was the hypothesis that led to Shmuel Shany and Amit Give to create Neurolief.

Neurolief has developed a non-invasive neuro-modulation device that could be available in local pharmacies for less than $ 500. The device looks a bit like Geordi's viewer on Star Trek: The Next Generation, unless it is placed on the head.

The neuro-modulator stimulates six branches of different nerves in the brain that regulate pain and mood state. Each device electrode sends a discharge capable of penetrating the skull.

"It must be done without causing pain to the patient and without damaging the scalp," explained Donate to ISRAEL21C.
The device is rechargeable, it adjusts to each type of head according to size and connects to a mobile or cloud application, so that the individual patient's experience can be compared to others for Find the right "dosage".

At each dose, Donar said, the device can send up to six electrodes individually, offering the possibility of creating a personalized treatment for each patient.

Neuro-modulation prevents the secretion of chemical products in the brain that cause pain. But the device also modulates the "threshold of activation" of the nervous system. Thus, the next time migraine appears (be it stress, lack of sleep or even excess chocolates), the nerves will not react as strongly as before. Neuro-modulation, by the way, has no side effects.

A study conducted in 2017 showed that the pain had decreased by 80 percent in those who tested the system. This represents double the implanted devices and much more than what a pair of analgesics can achieve.

"We compete primarily against the strongest remedies," said Shany, chief executive of Neurolief. And he added: "Our goal is not the patients whose symptoms are alleviating with ibuprofen but we focus on those who are medically frequent."

The Neurolief device should only be used during a migraine attack. Its size is a cover of sunglasses, that is, small enough to carry it in the bag or in the backpack.

Donar and Shany are not new in the field of neuro-modulation. Both began in sales of NESS-Neuromuscular Electrical Stimulation Systems, a company that creates neuro-modulation products to help people with paralysis in legs and arms.

After the purchase of NESS, the new owners moved the company to California. There, Donar and Shany could develop their own neuro-modulation device.

NESS reached a value of 75 million dollars in 2007. Neurolief, whose offices are in Netanya (Israel), is still in an early stage and there is still a long way to go. So far he has raised $ 5 million since it was established in 2013. Financing was commanded by Terra Venture Partners.

Neurolief has developed an innovative price model. Users can buy the preloaded device with a number of treatments (10 to start). "That's more like buying medications," said Eren Schenker, vice president of business development and marketing at ISRAEL21c.

If the device is working, more doses of neuro-modulation can be purchased online. "This does not cost more than the tablets that are already bought daily," he added. It is not yet possible to purchase the device in pharmacies because it will be available recently in 2019.

There are still some stages to complete, such as the completion of a study with 56 patients that is still underway. The company hopes to apply for the European Union the CE and the FDA seal of the United States at the end of 2018.

Neurolief has started with migraines since clinical trials with implanted devices have shown that neuro-modulation really works. The same techniques can be used for other indications and the following Neurolief objective is depression.
Donate has made a "remarkable results" report after a clinical trial at a psychiatric hospital in Israel. The neurodegenerative model of Neurolief could see the light as early as 2020.

There are other companies that work with the brain stimulus to treat depression, especially with the use of magnetic elements. "These are huge machines that can only be used in a clinic," he said, "while we want to offer something that can be used at home."