There is life in the background of Antarctica Science 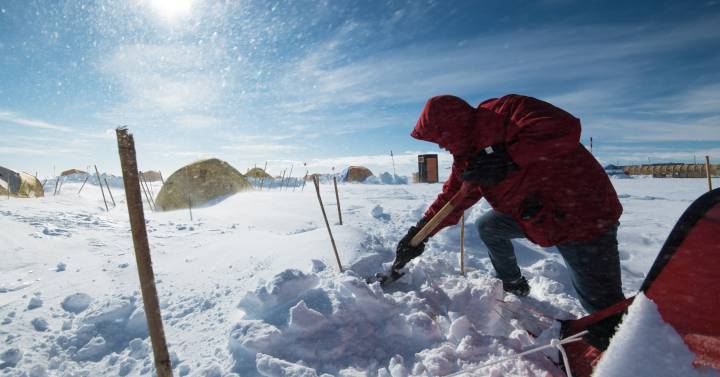 "It's been like landing on another planet." This describes several members of an expedition to Antarctica at which time their chambers showed for the first time the bottom of Lake Mercer, the deepest that has been explored in detail on this continent. Under the Antarctic ice there are more than 300 lakes – many of them connected – that make up an environment more unknown than the surface of Mars.

After a decade of preparation, an expedition led by the U.S. has managed to drill 1,068 meters of ice to reach Mercer's waters. "We believe that this lake and all the organisms that inhabit it have been completely isolated from abroad for at least 100,000 years," explains John Priscu, scientific leader of the expedition Scientific Access to the Subglacial Lakes of Antarctica (Salsa).

These liquid sarcophagus are the most similar ones on our planet to the subglacial lakes and oceans of Mars, Pluto, or the moons of Jupiter and Saturn, some with more water than the whole Earth. They are the most probable places to find life in the Solar System.

On November 26, a caravan of excavators, tractors and containers installed on sleds left the American Antarctic base of McMurdo to make a crossing of 1,046 kilometers to the interior of the continent. A vehicle with radar leads the entree by sending pulses to the subsoil to detect cracks that could bury the vehicles under tons of ice. The caravan includes mobile cabinets with heating, bunk beds, a dining room and a kitchen where you can even bake bread in the inhospitable desert of ice. They also carry almost 500 tons of equipment necessary to drill the ice and analyze the lake. After reaching the lake for the first time in 2017, the excavators began to build a landing runway for the planes that took to the rest of the expedition, with a total of 50 participants among scientists, drills, mountaineers and the military.

In the early 1960s, Soviet scientists exploring Antarctica detonated explosive charges embedded in the ice to measure the propagation of the expansive wave. Thus Lake Vostok, the largest in Antarctica, was discovered, buried 3,400 meters under the ice. Since then, Russia, the USA and other countries have launched a race to be the first to reach and analyze the pristine water of one of these lakes. Russia claimed to have achieved it in 2012, but the samples could be contaminated and not be valid. Mercer, discovered a decade ago with satellite images, is "the deepest that has been reached without contaminating the water and that has been explored in detail," says Priscu, already back at the McMurdo station.

The Mercer lake has a greater area than the city of Barcelona and a depth of 15 meters. The mission reached its waters on December 27, 2018 after melting about 28 tons of ice with a drilling machine that spit sterilized hot water. During the first days of 2019, 60 liters of water and five meters of sediment columns were removed from the bottom of the lake that, when they reached the surface, "bubbled with a gas still to be identified," Priscu explains. The lake is half a degree below zero, but the pressure inside it is about 100 times greater than on the surface, which allows the water to remain liquid and in contact with mud and rocks in the bottom, an environment conducive to life.

The first analyzes show that there are about 10,000 microbes in each milliliter of water in the lake, several orders of magnitude less than in the ocean, but considerable for a place that does not even reach a ray of light. "The lake has low levels of oxygen compared to air, which is due to the metabolism of these microbes," explains Priscu.

The gases that emerge from the sediment can be explained by the metabolism of these microbes, which instead of extracting energy from the sun by taking photosynthesis are obtained by eating rocks minerals. It is also possible that it is a methane of the decomposition of extinct marine fauna, since the equipment has found remains of algae and possible crustaceans in the background. The team has confirmed that Mercer's water is sweet, but possibly in warmer eras, millions of years ago, had contact with the sea.

The team explored the lake with a robot capable of taking pictures, sucking water and even trapping stones with a small robotic arm. "The water in the lake is like skimmed milk, very turbid, we could barely see what was 25 centimeters from the cameras," explains Bob Zook, an engineer at the University of Nebraska and the robot's creator. "It has been like a landing on the Moon," he says.

When the extracted material arrives in the U.S., the equipment expects to analyze the DNA of the samples, which will say if there are animals in the lake as well as microbes. The team will also try to breed the Antarctic microbes in the laboratory. "Our data will be used to design experiments that can study the oceans of moons in the outermost areas of the Solar System and find out if there was a second source of life," Priscu emphasizes.

Living weeks in a camp lost 600 kilometers from the South Pole "is the dream of a scientist, every day is a party and every meal a banquet," said this microbiologist at the University of Montana. Did someone drink Mercer's water? "We were tempted, but the samples are too valuable," he says.

The first footage of Mercer Subglacial Lake's floor! At 3,556 feet below the Ice, this is one of the most challenging places to reach on Earth. #nsfSALSA PI Kathy Kasic and graduate student Billy Collins equipped @GoPro with a Benthic 2 deep-water housing to get the shot. pic.twitter.com/JjHjXK47NS

Antarctica is home to 90% of all ice in the Earth and 70% of its freshwater. The melting rate of the continent has tripled in three decades. If it were to melt completely the level of the sea would rise 60 meters, enough to cover an extension of Earth higher than the whole of the European Union.

Understanding the hydrological system hidden under the ice of the continent is crucial to predict the effects of climate change. The American expedition, financed with $ 5.2 million, has used techniques to minimize the entry of water from the outside into the lake and has used ultraviolet radiation to annihilate microbes from the surface present in the drilling rig. This is the second lake accessed by the team after reaching the nearby Whilans in 2013, where they also found abundant microbial life.

Vostok's water is renewed on temporary scales of tens of thousands of years, while at Mercer this happens in the order of decades. This second lake receives two streams of fresh water, the largest of which comes from the west of the continent and the other from the east. It is thought that the lake drains in the Ross Sea, in the south of the continent, with what is a key piece to understand how the unknown and invisible network of lakes under the Antarctic ice contributes to the water balance in the oceans. These types of expeditions "change our conception of the fifth largest continent. We can not continue to see it as a huge and harmless block of ice. Instead we see that under the ice is the largest wetland in the Earth that plays a role globally, "emphasizes Priscu.