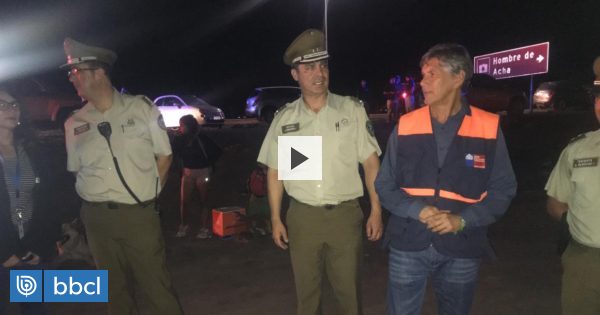 We are collecting more backgrounds on this news, keeping in mind updates.

Authorities ordered to evict preventively the Coraceros camp in Arica and the town of AchaFor the arrival of the water through broken ones that remained dry for years.

The previous one, due to the rains that have fallen during the last hours in some inner sectors of the region.

There was also a large increase in the flow of the San Jose River, so authorities asked to evacuate areas close to the riverbed of both rivers.

Also, the authorities ordered to suspend pedestrian traffic and preventively carry on the Arica bridges, from the Artisan Village to the mouth of the rivers.

The latter, due to the threat that means the possible increase in the flow of the river that crosses the city.

✖ URGENT INFORMATION: It is determined to suspend pedestrian traffic and preventively carry on the bridges, from the craft village to the mouth of the rivers. NEW DEVELOPMENT

PRELIMINARY INFORMATION: For activation of the Acha River and Chaca River, preventative evacuation is carried out in the villages of Acha and Campamento Coraceros, in the commune of Arica, coordinated by PDI, Carabineros y Bombarderos.

The climatic conditions favored that by the rupture of name Acha, years ago without water, it began to lower a discharge of the river of the same name, that would put in danger the neighbors of the place.

The evacuation operation is being coordinated by the Police of Investigations, volunteers of Firemen and officials of Customs officers.

❤️ [Ahora] Activation of the Acha gap is confirmed by summer rains. Water in progress no Coraceros sector, where there is an intendant (s) @RaulGilGon next to emergency equipment. IT DIES TO EVACUATE NEAR NEAR AREAS IN THE BIRTH OF THE RIVER @onemichile pic.twitter.com/6KWphurPyG

In consideration of these backgrounds, the Intendance of the Region of Arica and Parinacota, in coordination with the Regional Directorate of ONEMI, maintains the Yellow Yellow Alert for the weather event, which is in force since 30 January of 2019.

Review below images of the Acha River: