VIDEO: They discover a huge crater on Mars caused by the impact of a meteorite 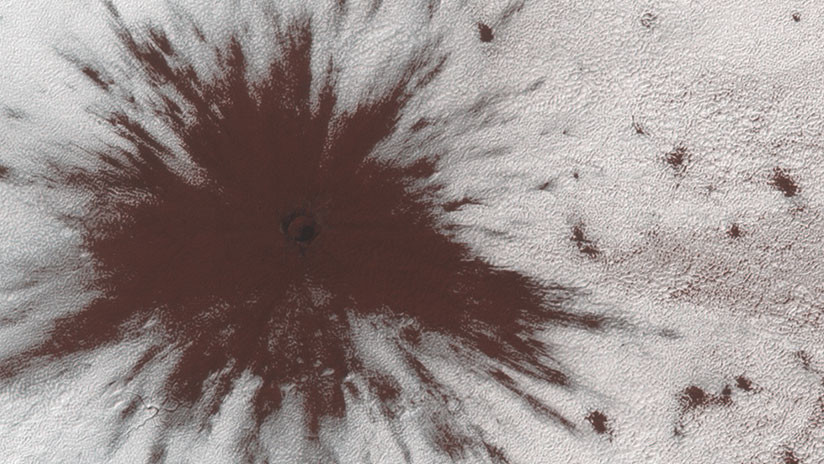 Scientists have discovered a new crater in the ice layer of Mars. Apparently, the great hole was caused by The impact of a meteorite which crashed into the south pole of the red planet, reported Monday the lunar and planetary laboratory of the University of Arizona (USA).

The images of the crater were captured by HiRISE, the most powerful high resolution camera that has been sent to another planet and that supplies material with a incredible level of detailAccording to experts.

Based on photo data, it has been determined that the impact on the area occurred between July and September of last year. The pattern of the color tones would reveal shock force characteristics of the meteorite, which crossed the ice layer of the season, excavated the darker sand and expelled it in all directions on the top of the layer.

In addition to the recent crater, they've been published first images A new field of dunes on Mars with different morphologies, in which you can see the cross section of them. According to the report, these formations depend on several factors, including the amount of present sand and the local wind directions.

The video shows them extraterrestrial dunes arranged linearly, first in areas with lots of sand and then the summits of the dunes with relatively free sections of dust. Later, scientists hope to obtain a second image to determine if these dunes are evolving or remain static.

Thanks to the material provided by HiRISE, he has collaborated with space missions of NASA to establish his landing site, among other important discoveries such as the confirmation of grains frozen water reserves under the Martian surface or contemplation of avalanches in motion.