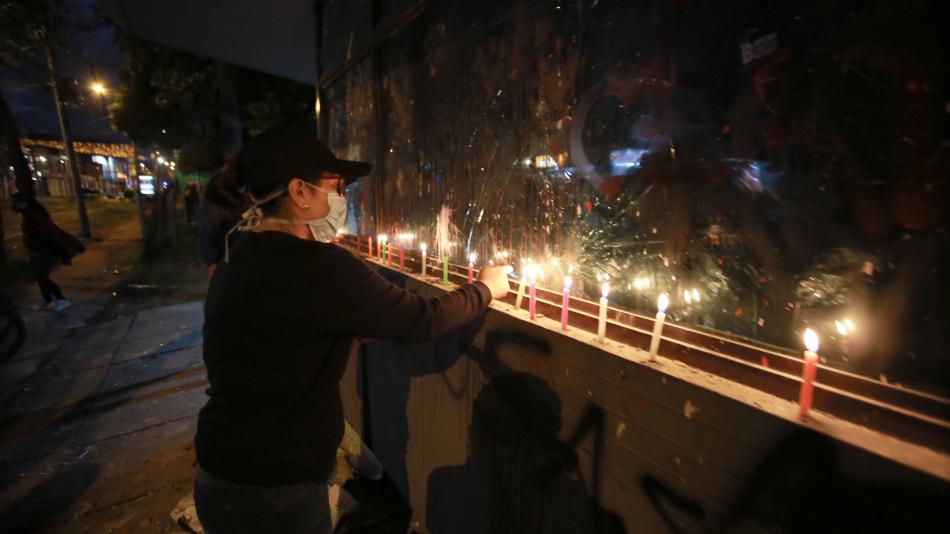 For the crime of homicide, three police officers who were on duty on September 9 last year appeared in court on Monday.

Tonight riots broke out in the city after the murder of law student Javier Ordóñez amid police proceedings in western Bogota.

As the hearings are being held separately, in the proceedings in which the Prosecutor’s Office was to charge charges against Andrés Eduardo Díaz Mercat before the court 42 of control of guarantees, his defense called for the case to go to the Military Criminal Justice.

According to the defense of Diaz, who is responsible for the death of Germán Smyth Ponts Valero in a CAI of Pugi, The death of the citizen occurred in an act of service in which, he said, “no kind of extralimitation is seen.”

The defense claimed that Ponts Valero’s death occurred “At a crossroads given to repel an attack on the CAI, which is being set on fire as well as police motorbikes, ”he said, noting that“ there is no reasoning to say that it was a human rights violation, nor that there was systematicity ”.

However, the victims’ representative, Nadia Triviño, Objected to this case going to the Military Criminal Justice. He first noted that there is a context of systematic police assaults on the peaceful protest, citing several cases of police overcrowding and crimes committed by members of the Public Force.

And in the particular case, that is, the homicides that took place in the middle of the protests for the death of Javier Ordóñez, at the hands of the Police, the victims’ representative said it “exceeded the proportionality, necessity and rationality of the use of force.” Tonight, Triviño said, “14 people were killed in a single modus operandi: police firing their firearms at protesters.”

14 people were killed in the same modus operandi: police firing their firearms at protesters “

According to the lawyer Triviño, Germán Pontes Valero received a bullet impact to his back, fired by a weapon of the patrol boat Diaz Market, that according to her incurred in an “extralimitation of authority” since the citizen was not armed , and this is shown by the reports of the authorities.

Patrolman Díaz Mercat, the lawyer said, may have affected even more people as “He fired his gun 21 times.”

“Clearly, because of the way the facts were presented, the crimes have nothing to do with the service. The person he shot at was a civilian who was mobilizing in the exercise of his civil and political rights, “the victims’ representative said.

To the diligence also spoke the Chief Prosecutor, who said it is clear that the Public Force cannot use firearms against civilians, Unless it is a fact in self-defense. But in this case, he said, according to the videos the prosecution has collected “there was no risk, no imminent danger. The videos do not show a crossroads either, as the defense said “the prosecutor said.

On the contrary, he noted, “what is seen in the videos is members of the Police operating their weapons disproportionately against members of the community,” the prosecutor said.

In the particular case of the death of Germán Ponts Valero, the prosecutor questioned that after receiving the shot he was not even assisted by members of the Police, as it was the citizens themselves who sought medical help.

He has also criticized Patrolman Diaz for saying that tonight he was at another point where he really wasn’t and stated that he received injuries with a blunt object that he did not actually receive.

Although he has asked for the defense of Díaz Mercat so that his case can go to the Military Criminal Justice, the bail judge 42 said this is not the time to allege this conflict, but it must be given is before the knowledge judge, so he scheduled for the week that the charge impeachment hearing and insurance measure.

On the other hand, for the events that occurred near the CAI Verbenal, north of Bogota, the uniformed man will be charged Jhon Antonio Gutiérrez Rodríguez.

(In context: Prosecutor’s Office asks Police to clarify use of firearms in protests).

The same uniform will be responsible for the death of Andrés Felipe Rodriguez Ávila.

At the hearing against Gutiérrez Rodríguez, the victim’s wife and brother Andrés Felipe Rodríguez Ávila appeared, asking that the truth of what happened to his loved one be known.

“My being yearns for true justice and I hope that in this hearing there is truth,” said Maira Paez, the victim’s 17-year-old wife and mother of her son.

At the diligence the defense of the uniform said that the case must go to the military criminal justice to deal with facts that occurred in the framework of the service.

He also noted that on the day of the events there were acts of violence that had nothing to do with the peaceful protest and that the uniformed man was called to confront these actions that led to the destruction of city police headquarters.

That is why he asked that the judge not make the hearing and the folders of the investigation go to the Military Criminal Justice. If he did not accept the request, the lawyer said the conflict of jurisdiction would escalate.

“The police function was overflowed. This function has limits to the use of force and especially to the use of weapons,” said the delegate of the Prosecutor’s Office.

(In context: Prosecutor’s Office has 93 witnesses in the case of the murder of Javier Ordóñez).

And for events that took place near the CAI Aures the hearing for the imputation of the crime of homicide against José Andrés Lasso Valencia was scheduled. The uniform is linked to the death of Angie Paola Baquero Rojas. However this diligence was postponed for tomorrow.

The Public Prosecutor’s Office has in its possession security videos, testimonies and expert opinions that compromise the responsibility of the uniformed in these facts not associated with acts of the service.