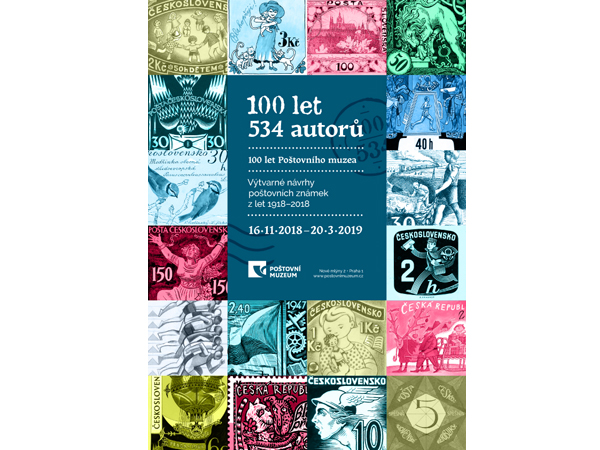 The exhibition for the centenary of the establishment of the Postal Museum represents the art designs of postage stamps from 1918 to 2018.

Czechoslovakia, and after that, the production of Czech marks became world renowned for perfect control over demanding printing techniques – especially in multicolored steel flats. A lot of them have a large number of artists who have dealt with and deal with the art of postage stamps. A collection of Czechoslovakian and Czech seals kept in the Postal Museum collects tens of thousands of artistic designs of postage stamps. Artistic design of stamps has been designed today by renowned artists and painters, so the Post Office Museum managed to build a highly respected collection of unique graphic works during its 100th anniversary.

Exhibition 100 years – 534 authors it focuses primarily on the public of the previously unknown unused and unsuccessful designs of postage stamps, created during the centuries of Czechoslovakian and Czech seals. He can not pay attention to all the authors who were until now 534. In addition to the traditional authors Alfons Mucha, Mak Svabinsky, Karel Svolinsky or Oldrich Kulhanek, authors of well-known names such as Frantisek Kupka, Vaclav Spal, Josef Chapek, Josef Vachal and many Others are usually not associated with stamps. Even so, the exhibition will feature 181 original art designs.

From 18th December 1918, when the first Czechoslovak seal was issued, and the simultaneous case of happy circumstances was the same date, the postal museum was founded until November 15, 2018, when the opening of the exhibition was held, 4042 brands were issued, of which 3029 mark Czechoslovakia and 1013 Czech. They are based on the broadcast plan published by the publisher of our seals, the Czech Republic, the Ministry of Industry and Trade of the Czech Republic and the Czech Post, which is the only state postal operator issuing seals. Significant authors of the Czech postage stamps belonged to the artists Kulhanek, Born, Franta, Knotka, Ziegler, Khunova, Suchanek, Kavan, Zapadlik, Netopil, Hashkov, Maget, Sivko, Zeman, Mezl, Richter, Sliva and many others. Famous graphic artists such as Karel Demel and Jiri Anderle have their grades. We can also mention the painter Jana Hyska or graphic designer Michal Cihlar, who designed many brands or letters and whose names appear in the case of unacceptable designs.