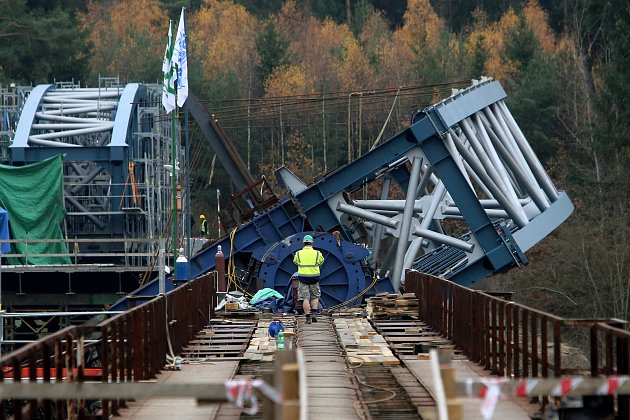 Pnovani – From Thursday, workers are replacing a new construction of a bridge of a railway viaduct at the site between Pnovani and Bezdružica. The steel structure of the railway bridge over the Hracholus dam has been reached for over a hundred years and has demanded a reconstruction. From Thursday morning, the new bridge was replaced as a new one.

An investment of CZK 110 million brought a unique business flow. Some parts of the construction are mounted on the mounting surface in front of the bridge. A few weeks ago, the first one was moved to the old bridge and was preparing for a reversal. "The new construction is attached to the original and it is reversed and repaired by a hydraulic system," Petr Zakovec, who oversees construction on the site, described the work of the SŽDC.

A technically required process is awaited by a team of experts within the overall reconstruction of the bridge two more times. About a month later, the other bow should rotate, and the last third of the next month. "Of course, this is a process for a long time, the structure must be slowly reversed, everything is carefully monitored, one step means a shift of about two degrees," explained Zakovec.

"After completing the complete reversal, the new construction is seated on bearings, fastened, separated, so that the original can be moved to the site," he added. From there, a historic steel monster awaits only one way, ends up in waste. As the builder is closed, the other two objects should move faster.

The SŽDC Event Investor believes that by replacing the steel structure of the viaduct line it is possible to shorten the time of the train ride. The bridge was reduced speed due to the age of steel. "Reconstruction will eliminate reduced speed, but in particular we will increase the reliability and load capacity of the bridge, which will also result in a slight reduction in the current driving time," explains spokesman SŽDC Marek Illiaš.

Due to reconstruction of the viaducts, the traffic was stopped on the line between Pnovani and Bezdružica. "The work on the bridge began in April, the exits on the line last in late July and will end in February. Filling the repair depends on the time," said Radka Pistorius, a spokeswoman for the SŽDC.

From one shore of the dam to the other, the bridge and the pedestrian will be able to cross the corridors after the completion. Its part will be a completely new mountain bridge copying the reverse arches of the structure. Therefore, no restrictions on the passage of the train are prepared for pedestrians.

That is why the Pilsen area will create a new forest path to the hill on the shores of the dam. (jk, pro)