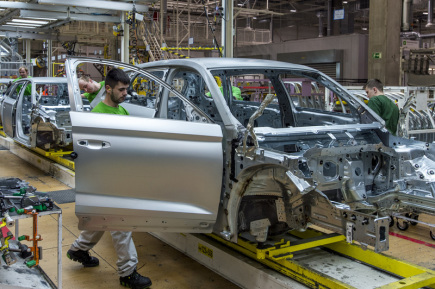 Volfsburg – Volkswagen moves production of family cars Passat to the Czech carmaker Škoda Auto in Kvasini, which will be manufactured with the Škoda Superb and Kodiak models. Skoda Karok and Seat Atec are currently produced in Kvasins. Their production will be relocated to a new Volkswagen factory, which should be located in Eastern Europe. Its location has not yet been selected. Today announced changes are part of a new five-year plan that mainly focuses on the production of electric cars in races in Germany.

Škoda Auto expressed satisfaction with the continued production of the Superb model in the Czech Republic. More than a year ago there was speculation about the possible transfer of Superb to a VV factory in Germany. Today's decision by Volkswagen to pass Passat cars at the Kvasini plant will ensure the long-term future competitiveness of both factories in the Czech Republic, said chairman Škoda Auto Bernhard Maier, CTK.

He reminded that next year Kvasini will start production of the first Škoda brand with plug-in Hybrid Superb drive. From 2020 Škoda to Mlada Boleslav will produce clean electric vehicles. "Today's decisions thus ensure the long-term future competitiveness of both Czech factories," Maier said.

The decision of Volkswagen to build a new factory in Eastern Europe, according to Maier, offers the opportunity to realize the urgently needed growth of production capacities for Škoda models. Maier did not comment in order to move Karok's production to a new factory.

Volkswagen intends to expand its production capacity in Eastern Europe by another factory since 2022. The location of the multipurpose brand factory, the car manufacturer has not yet decided, she just said it will be in Eastern Europe. German media earlier speculated that it would be in Bulgaria or Turkey.

According to EI Petra Knap, the automotive industry expert, Škoda's shifts in the short-term perspective strengthen the Group's position as Kvasini confirmed that it is capable of producing next to a super-class sedan like Passat. "At the same time, the good news is that Škoda has become green to create new capacities in Eastern Europe," he said. In the long run, Skoda will invite Knap to challenge the group as part of taking the electric car.

Passat is among the mid-sized cars. Volkswagen has produced it since 1973 and is currently on the eighth-generation market in sedan and real estate versions. The family includes Arteon coupes. The German media, however, warns that the sale of Passat falls. Ten years ago, every fifth VV Passat car was sold, now every ten.

Last year Škoda delivered 1.2 million cars worldwide. In the Czech Republic, it is engaged in the production of three factories in China, Russia, Slovakia, Algeria and India, mainly through group partnerships, Ukraine and Kazakhstan in cooperation with local partners. It employs more than 35,000 people and is active in more than 100 markets.

The damage is no longer sufficient in the Czech Republic, and some of its cars are produced in other factories of the concern. In 2014, Škoda produced a million cars, and now it is around 1.23 million, and this number should continue to grow significantly over the next few years.