Coca for the Egyptian public: I'm sorry and soon many things will be clarified 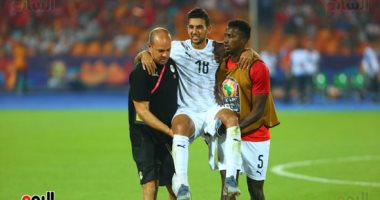 Egyptian forward Ahmed Hassan Koka apologized to Egyptian fans after the departure of the Pharaohs of the Africa Cup of 2019.

Egypt dropped Africa's Cup of Nations in 2019 in the 16th round with a 1-0 defeat against South Africa.

"We're sorry, it's the least we can say. Things will soon be clarified, and the next is better for Egypt, and thanks for your support and encouragement," he wrote through his official account on Instagram.

Egypt will host the African Cup in its 32nd edition until July 19, with the participation of 24 teams for the first time since the start of the first tournament in Sudan in 1957, the fifth time that Egypt goes host the continental competition after receiving 1959, 1974, 1986 and 2006.

The Africa Championship will be held in six stages: Cairo, Alexandria, Air Defense, Salam, Suez and Ismailia, with the participation of 24 teams for the first time since the beginning of the first tournament in Sudan in 1957.