Thousands of people are leading the 40th interstate Istanbul marathon 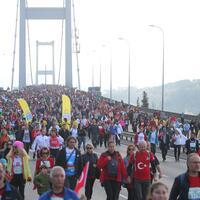 A record number of runners participated in the 40th Istanbul Marathon, the only continental race ever held on November 11th.

Istanbul's Vodafone marathon started on the Asian side of the bridge in Istanbul, which was previously known as the Bosphorus Bridge.

The destination line is located on the historic Sultanahmet Square on the European side of the city.

This year's theme was "Run Istanbul for a Healthy Future".

About 5,000 runners – more than half of their foreigners – competed at 42 km marathon.

The marathon was attended by 54 elite runners from Turkey, Kenya, Ethiopia, Azerbaijan, France, Bahrain and Morocco.

Compared to the last years, the number of foreign runners on the marathon has doubled.

The Cenians dominate the race

Kenya's Ruth Chepngetich won the 40th international women's title of the Istanbul Marathon, while the Kenyan Felix Kimutai won the men's competition by breaking the record in a 42-kilometer record in Istanbul on Sunday.

Both Kenyan players have broken a record in Istanbul, 42 km in the men's and women's races.

About 30,000 professional runners from more than 100 countries participated in the marathon.

In addition, around 100,000 people run in the transcontinental Istanbul marathon entertainment passage of 8 kilometers.

"Istanbul has become a marathon marathon like New York, Boston and Tokyo," Youth and Sports Minister Mehmet Muharrem Kasapoglu said of the race.

"By merging the continents, we will prove the unique strength of the sport," Kasapoglu said.

The idea of ​​the Istanbul Marathon began in 1978 when Turkish officials were informed that a group of German marathon runners visiting the countries visited next year in Istanbul. It was then decided to implement the Eurasia Marathon project with its name at that time.