Spectacular turn of events! SNCF puts an end to the current transformation project of the Gare du Nord 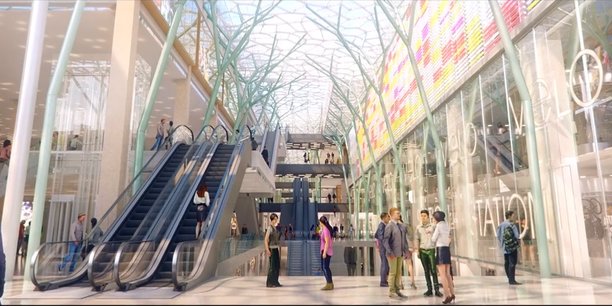 Spectacular turn of events! Less than a year after the agreement between the SNCF and the city of Paris on the transformation of the Gare du Nord, the railway group announced on Tuesday evening that it was ending the current transformation project, led by a company joint venture between Ceetrus, real estate. subsidiary of the Auchan group and SNCF Gares et Connexions. This is due to the “unbearable deviations from the contractual commitments” on the part of the concessionaire. The gigantic project was to triple the area of ​​the Paris station, the first station in Europe, in anticipation of the 2024 Olympic and Paralympic Games.

As a reminder, the railway group had chosen the real estate company Auchan in July 2018 to triple the area of ​​the Paris station in anticipation of the 2024 Olympic Games. More specifically, the city of Paris adopted this project by the Paris Council on July 2019 and the concession was awarded in 2019 to SA North station2024 (StatioNord), a joint venture formed by SNCF Gares & Connexions (34%) and Ceetrus (66%), the latter being responsible for the design, works and financing.

One billion euros in additional costs

In July, Gares i Connexions had been warned of a landslide in the estimated cost of the works that brought the bill to more than 1.5 billion euros, compared to the 500 million still expected at the end of 2020 and a “delay considerable ”that prevented them. will end the 2024 Olympic Games

SNCF now promises “a quick adaptation of the Gare du Nord” to the 2023 Rugby World Cup and the 2024 Olympic Games and “the design of a new transformation project (…) developed in close consultation with the interested public actors “.

Ceetrus, for its part, recalls that the renovation project has been known since the establishment of the concession contract in February 2019, in addition to a pandemic, various innovations and resources that have a lasting impact on its implementation.

After a long controversy with the mayor of Paris (who had originally approved the dossier), a less ambitious version of the project was adopted in November 2020, which therefore did not avoid difficulties.

Transformation of the Gare du Nord: Paris wins the battle against the SNCF

Nicolas Bonnet-Oulaldj, head of the elected Parisian communists, was delighted with what he considers “the abandonment of the Gare du Nord shopping center”, which celebrated “a victory against a project that gave a privileged place to the private sector to the detriment of user needs “.

“The proof that recourse to the private sector always entails exorbitant budget disproportions,” welcomed LFI Paris adviser Danielle Simonnet, who asked the mayor of Paris “to finally listen to the residents’ protest.” users and associations “. Communists elected on the Île-de-France have demanded the abandonment of another project they are vying for, that of the CDG Express, a fast link that in 2025 will link the capital with Roissy airport. For her part, Valérie Pécresse told the Paris Grand Summit that she wanted the CDG Express project to be successful.

“We are available and ready to start a new project to renovate the Gare du Nord to serve everyday users, urban integration and intermodality. This project must be able to start for the 2024 Olympic and Paralympic Games,” explains Emmanuel Grégoire. First Deputy Mayor PS Anne Hidalgo, quoted in the press release.

“The inhabitants of district 10 (district where the station is located, editor’s note) want a new, greener project (…) that will finally free their yard from vehicular traffic and the many vehicles parked there “The ambition is to facilitate the opening of the station in its neighborhood by giving more space to public transport, pedestrians and bicycles,” writes Alexandra Cordebard, mayor of the 10th arrondissement of Paris.

Ile-de-France Mobilités (IDFM) again asked the state on Tuesday for a grant of 1.3 billion euros to compensate for the losses linked this year to the Covid-19 pandemic, threatening to suspend “totally or partially” its payments to the RATP and SNCF.

“There can be no way out of the Covid crisis on the Île-de-France without compensation for the financial losses of public transport, as has been done around the world,” said Valérie Pécresse, president of the regional transport authority. quoted in a press release.

“Without support for public transport, France’s 2030 recovery plan is already underway,” joked the elected (Free!), Also president of the Ile-de-France region and candidate for the appointment of the right in the presidential election.

“Without the commitment of financial support from the State, Ile-de-France Mobilités will be obliged to suspend in whole or in part its payments to public groups of RATP and SNCF since the end of September 2021 “, threatened the institution, noting that the level of assistance currently reaches 70% of its 2019 level, for a level of transport supply” almost equal “.

IDFM pays 400 million euros a month to RATP and 300 million a month to SNCF, according to the press release. The regional authority relies on the “review clause” contained in the protocol signed with the state in September 2020, after having already suspended its payments to the two public operators.

In fact, this provides for a “reassessment of the situation in the event of additional loss of resources attributable to the health situation.”

However, IDFM expects for the current year losses of the order of 1.3 billion euros corresponding to about 1 billion, the decrease in tariff revenues and, for about 300 million euros, the payment for mobility, the tax paid by companies.

For the 2020 losses, IDFM had obtained from the State 1,451 million euros in repayable advance and 150 million in subsidy.