In the ballot papers ND Petros Tatsopoulos and Antonis Panoutsos 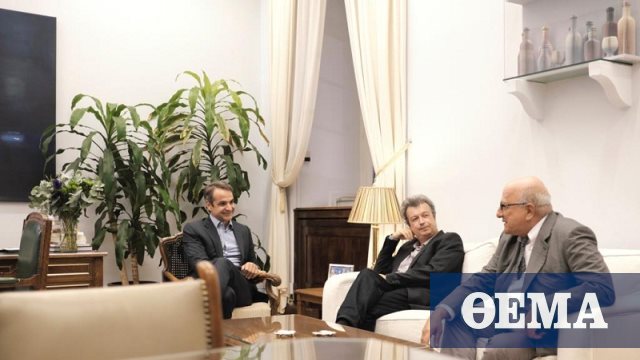 ABOUT Kiriakos Mitsotakis tries to include people who are not new democracies on the lists; Tatsopoulos and Panoutso who will be candidates for national elections

Candidates with the Nevada Democracy will be in the upcoming elections, writer Petros Tatsopoulos and columnist Antonis Panoutsos, who today met with Party President Kiriakos Mitsotakis.

According to ND, the goal of Mr. Mitsotakisa is an extension of the party with non-originating people, the fact indicated by the nomination of Mr. Tatsopoulos in the northern sector of the second Athens and the city. Panoutsos in the west.

According to Piraeus, Petros Tatsopoulos and Antonis Panoutsos, with their written statements and public interventions, long supported ND's efforts to bring about the political changes needed in the country, and today they were pleased that they welcomed Kiriakos Mitsotakis's proposal joining the ND- in and supports it now and in practice.

It should be noted that Petros Tatsopoulos was elected deputy with Syriza in 2012, and in January 2014 he retreated, condemning the adventurousness of his leadership team, the populist opposition to Syriza, its strategic advocacy with ANEL, and tolerance for the phenomenon of violence. His experiences from his participation in Syria are recorded in his book "I was there too." His approach to the ND began for months, and is present at the party's last congress.

For his part, Mr. Panoutsos has a novelty in journalism, mostly in sports. As New Democracy highlights, for a long time with its political texts and public interventions, it does not hide its support in the southwest and personally Kiriakos Mitsotakis with whom it has frequent communication. Antonis Panoutsos is the first to make a poll and, as he says, in a joking manner, "it's time for the commentator to come to the stadium finally."