IPad Pro was tested on endurance tests and disappointed 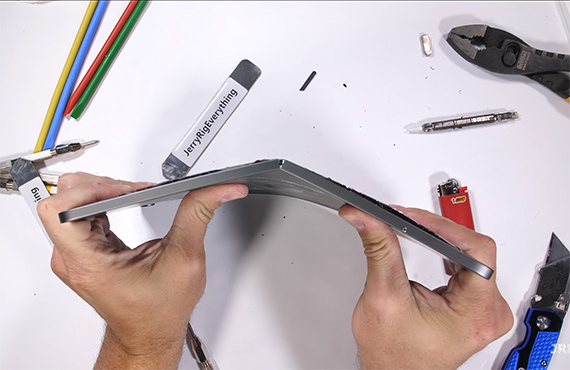 The iPad Pro at 11 "and 12.9" was introduced two weeks ago and while it has a new design, powerful processor and features, the JerriRigEverithing power test shows that the quality of the production is disappointing.

Zack Nelson (JerriRigEverithing) is used to "torturing" devices that fall into his hands to see their boundaries and build quality, and the iPad Pro was not an exception and thrown into the test arena. Tests start with Apple Pencil, which in the middle came down with a little pressure, revealing its interior using magnets used to fit on the iPad Pro and charging.

The series was taken over by the iPad Pro, which passed the screen gradation test perfectly, while the impression caused thin glass. The construction of the iPad Pro is based on aluminum, as shown by the touch of Zack Nelson blades on each side of the device. Then we tested the flame of the flame on the iPad Pro screen, with the pixels starting to burn after 10 seconds and returning to their original state, which would not have been the case for the OLED screen.

Finally, but not least, the most important part of the test is the iPad Pro bending test, in which Apple does not seem to attach great importance to its durability, as Zack Nelson himself says, a tablet that is sized as paper, and switches as paper. In an effort to shrivel it was in the middle as if it was made of foam, which is not the best for a device sold in our country from 969 to 2279 euros.