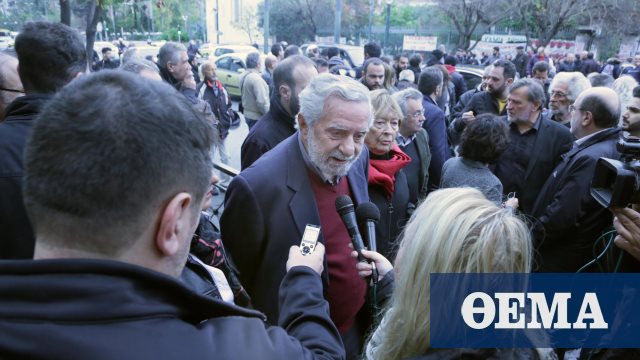 Various reactions have been caused by the expansion of ministers and executives of Syriza by groups of students, earlier today, at the Polytechnic University. Among those who were attacked were Education Minister Kostas Gavroglou, as well as Panos Skurletis, Nikos Filis, Panagiotis Rigas, Thodoris Dritsas, Nikos Toskas, Nikos Manios and Anneta Kavvadia.

According to what became known, the SIRIZA delegation arrived in Polytechnic from the pedestrian zone, but the young people closed the entrance and did not allow them to enter the academic institution. Then a tension broke out, as members of SIRIZE insisted on entering and kicking and kicking, while some threw coffee and water. Finally, the delegation failed to enter the Polytechnic and left.

What was not allowed to deputies, ministers and other Party members of Syriza, entering into the Polytechnic mark, is to a great extent the alienation of Syriza from a place that is usually considered privileged. The question is whether this alienation will lead to rupture and if it reflects the attitude of society, now, according to the government party.

The political world, however, condemned the incident, and the New Democrats emphasize that "episodes on the occasion of the anniversary of the Polytechnic, unfortunately, have acquired an almost ceremonial character."

"These problems are serious and must be resolved in a democratic way," Education Minister Kostas Gavroglou said, adding that "these days those who have in mind not only victims of children who have given a fight and marked its completion of dictatorships, but also the persistence of they had to preserve democratic processes in such difficult circumstances, reminding that democracy was not given and must be conquered and expanded daily by day-to-day struggles. "

"This behavior does not respect the Polytechnic competition," Deputy Defense Minister Panaiiotis Rigas said after the incident. For "concealed fascism," Syriza MP Nikos Manios spoke. "This is the face of Fascism, tomorrow's fascists," he said. "These are the actions of some who try to block the democratic expression of people and people who want to respect the games that happened at that time," said Nikos Toska.

"Owners of the movement" is characterized by Nikos Filis who prevented the delegation of Syriza to lay a wreath at Polytechnic. Speaking at the radio station 104.6 THEME, Mr. Philis said: "Polytechnics is not a part of any party. Now that we are faced with the rise of the far right, such perception of property is in the extreme right."

He emphasized that "SYRIZA always supported the message of unifying the Polytechnic, not the property," adding that "contrary to what happened in a society where there are no massive manifestations against the government – there are expectations, but not demonstrations – a group of self-confident pioneers in many quotes she wanted to destroy the message of the polytechnic into the anti-government operetta. "

"This morning, the delegation of Syriza and his youth is not prevented from laying wreaths in Polytechnic by the unscrupulous owners of the celebration. The leaders of the anti-dictatorial struggle and the left-wing fighters were hindered by the extreme minority who tried to celebrate the celebration," the Syriza statement added, The November uprising has no owners, belongs to the Greek people and Greek youth, inspires and lives in today's struggles against fascism, in the struggle for the continued expansion of democracy. "

"The new Democracy is severely condemning the protests against Syriza's executive directors," the press release of the main opposition party said in a statement on the incident. "Episodes on the occasion of the anniversary of the Polytechnic have unfortunately gained almost ceremonial character and emphasize the need to restore security to universities, so they really become an area of ​​free expression for everyone," comments the ruling opposition party.

"Polytechnic symbolizes the freedom struggle," Potamis said in a statement on the occasion of the attack by Syriza executives in Polytechnic. "Those who are ill and prevent representatives of political organizations from waving on behalf of defending their own ideas, deny the meaning of the uprising," the statement concludes.

Now let's say, how sorry I am that I was unhappy, Manios, Dritsa, etc. From their companions, I'll tell lies # Polytechnic

Strike your finger, and those who have built a career on their bumps and ears, go a long way … And they all come to the line and cry funny themes and they do our classes of democracy !!!! # siriza_keftiles # polytechnics

The surprise and irritation of the leaders of Syriza is unimaginable. When you use a coin for years, you will inevitably pay it # Polytechnic

I have a lot of comments to make about the retaliation (sic) of the SIRIZA delegation in the morning # Polytechnic, but it is advisable not to comment on public issues that relate to the responsibility of the Office of the Prosecutor for Domestic Violence.

The fascists were characterized by Rigas, Manios and Tossas as those who pushed them

"Their friends beat them, but they are upset when their enemies beat"