The earthquake near Budapest began with a terrible growl 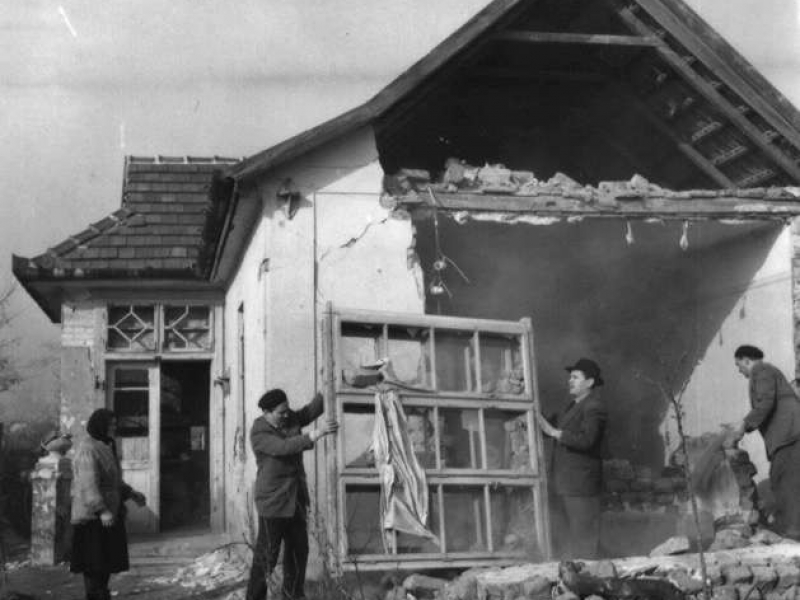 On January 12, 1956, at 6:46 a.m., the sound of a terrifying shudder from other countries alarmed residents of Dunaharaszti, a village on the outskirts of Budapest. A few seconds after the roar of the depths ceased, the ground began to shake, trees and pylons along the road began a creepy dance, and the houses collapsed in fright. The church tower next to the main road cracked and the bricks rained down on the sidewalk. Dozens of headstones fell into the cemetery and the excavated wells were buried in mud. The Dunaharaszti was the most devastating earthquake in Hungary in the 20th century.

This was the worst domestic earthquake of the 20th century

In the early days of 1956, seismic activity around Budapest revived. Prior to January 12, instruments at the Helsinki Seismological Observatory detected a total of 31 minor earthquakes that erupted in Buda and the Monor and Gomba areas of Pest County. Although earthquakes could not be predicted at that time or then, the sudden rise in seismic activity clearly indicated that something was being prepared down there, on the ground.

then the ground began to shake. The quake was detected by seismological stations in Budapest, Kalocsa, Kecskemét and Szeged, and shock waves were even detected at the Vienna and Ógyalla observatories.

according to the Richter scale, it is one of the moderately strong seismic events,

which, in addition to being noticeable, can cause severe damage to weaker buildings.

The ground cracked as a result of the earthquake

The first wave of shock caused a huge panic in the settlement of Pest County. Of the 3,500 buildings in Dunaharaszti at the time, 3,144 residential houses were damaged, several of which collapsed. Due to the earthquake in the neighboring village,

The roof of the church was torn in Taksony,

and several homes were also severely damaged and two people lost their lives.

The quake created a 3-centimeter-wide crack in the ground and several mud craters.

In Taksony cemetery 50-60 headstones fell and there were almost no houses in the village that had not collapsed or the chimney had been damaged. As a result of the earthquake, 38 injured had to be treated, some of them with very serious injuries.

The main earthquake was followed by another shock wave, shortly before nine o’clock.

The quake could have been caused by the displacement of a deeply sunken dolomite;

this Triassic dolomite rises above the surface in the image of Gellért Hill on the banks of the Danube at Buda. Although the 1911 Kecskemét earthquake also had a magnitude of 5.6, the consequences of the seismic event of Dunaharaszti, which died, became much more severe.

The strongest seismic event in Hungary to date was the Komárom earthquake on June 28, 1763. As a result of the earthquake, estimated at a magnitude of 6.2-6.3 according to the Richter scale, the center of Komárom collapsed and 63 people lost their lives in the natural disaster.

The earthquake caused severe damage to Győr, but the 13th-century Premontre Abbey Basilica in Zsámbék also fell into ruins.

Hungary is one of the least seismically active areas; the Carpathian Basin is located on the border of the Adriatic microplate and the Eastern European tablet.

Although the Mediterranean basin is one of the most seismically active regions on Earth, the Eastern European table is virtually earthquake-free; and the Pannonian or Carpathian basin at its border is characterized by moderate seismic activity.

The most seismically active areas of the Carpathian Basin are connected to the border areas of the Alps, the Carpathians and the Dinaric Mountains, the so-called Alpine-Dinaric Orogenic Zone, compared to which the earthquake is moderate in Hungary. However, some areas of the country, such as the Eger or Bakony area, as well as the Mór, Jászberény, Kecskemét and Dunaharaszti areas, are characterized by having a higher seismic activity compared to the national average.

The interesting phenomenon dates back to the formation of the Carpathian Basin, where the earth’s crust is much thinner than in other areas. This is due to

that the earthquakes that erupted in Hungary, without exception, are among the so-called shallow nest earthquakes,

which erupt in the upper range of the earth’s crust, to a depth of 20 km, but measured at depths between 6 and 15 km. At the same time, low seismicity does not rule out the possibility of occasionally strong earthquakes, as exemplified by the great Komárom earthquake in 1763.