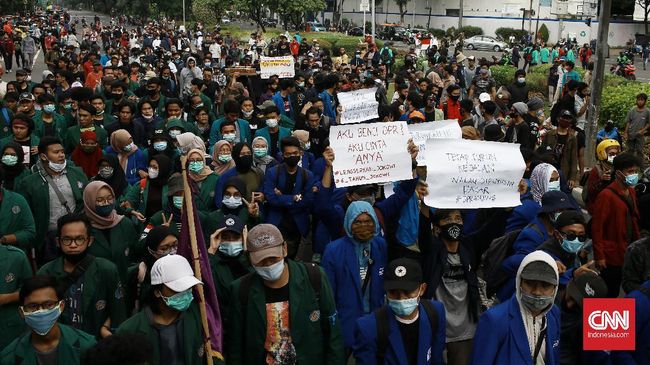 All Indonesia BEM Alliance (WELL YOU) and the Movement to Save the KPK (GASAK) wrote to the President of the Republic of Indonesia Joko Widodo (Jokowi) designate dozens of KPK employees who did not pass the National Insight Test (TWK) became the State Civil Apparatus (ASN).

On the menu they gave a 3×24 hour ultimatum for Jokowi to position himself. Otherwise, they will take to the streets.

“We, the BEM Alliance from all over Indonesia and GASAK gave an ultimatum to President Jokowi to take sides and appoint 56 KPK employees to become ASN within 3×24 hours from today. If you are still silent, along with elements of people we will take to the streets to convey to you rational aspirations so that you may realize them.“, said the fragment of the letter dated September 23.

They also criticized Jokowi’s silence over the dismissal of 57 employees because they did not approve of the TWK in the context of changing their status to ASN. In fact, the implementation of the status transfer has been shown to be maladapted and violates Human Rights (HAM) as found by the Indonesian Ombudsman and Komnas HAM.

“Instead of adding KPK officers, it turns out that 57 KPK agents were fired under the number SK 1327,“they said.

They mentioned several reasons that could be the basis for Jokowi to act. Among them, the KPK was weakened in a structured, systematic and massive way by revising the law; the elected leadership of the KPK is problematic because it has been shown to violate ethics; to the process of changing employee status that is fraught with infractions.

Apart from that, they also included the decision of the Constitutional Court (MK) which stated that the state transfer process should not harm the rights of KPK agents.

“In our opinion, this base is enough to make people sick, so you should be angry with the current state of the KPK. So who can save the KPK?“they said.

“Mr. Jokowi, as for the 57 KPK employees who were castrated from their rights, it is not just workers who have lost their jobs. However, it is a matter of dignity and cheapness of the Indonesian people who have the spirit of anti-corruption and justice.“, it continued.

When confirmed, the coordinator of the BEM SI alliance, Nofrian, confirmed the contents of the letter dated today, September 23, 2021.

“If this ultimatum is not achieved, we will take action to take to the streets with the people,” BEM SI alliance coordinator Nofrian Fadil Akbar told the telephone. CNNIndonesia.com, Thursday (23/9).

Not only that, the letter also raised the issue of the weakening of the KPK after Law no. 19 of 2019 relating to the KPK. The ethical violations of the two KPK leaders, Firli Bahuri and Lili Pintauli Siregar, were also seen as a form of slowness by the anti-corruption agency.

“We want to make sure that the unrest related to the current state of the KPK does not only occur on one or two campuses, but on many campuses,” he said.

Regarding his own action plan, Akbar has not given definite information. His party is still consolidating given that members of the SI BEM alliance are scattered across several regions.

“We’ll see how good it is. It’s centralized in Jakarta or each region,” he said.

Meanwhile, the president of UNS BEM, Zakky Musthofa, made sure that UNS BEM would participate in the action in Jakarta if Jokowi as president did not act within the specified deadline.

“We are recruiting the masses to go to Jakarta,” he said.

The man who is also the affairs coordinator of the BEM SI alliance added that the action will also involve community groups and communities that are observers of corruption issues in the country.

“We have person-person responsible for coordinating with anti-corruption groups as well, ”he said.

For information, up to 57 KPK employees are counting the time of dismissal. It doesn’t take more than a week for dozens of employees to end their service in anti-corruption institutions. Novel Baswedan and his friends will be fired on September 30, 2021 according to the decision of KPK leader Firli Bahuri cs.

Earlier, President Jokowi explained why he did not comment much on the fate of 57 employees of the Commission on the Eradication of Corruption (KPK) who will be fired after failing the National Knowledge Test (TWK) to convert -be in state civil servants (ASN).

According to Jokowi, he did not respond much to public pressure to intervene in this matter out of respect for the ongoing process in the Supreme Court and the Constitutional Court.

“I will not respond, awaiting the decision of the Supreme Court and the Constitutional Court,” Jokowi said at a meeting with several media editors at the Presidential Palace in Jakarta on Wednesday (9/15).

Jokowi explained that the authority to answer the question was the supervising official, in this case the Ministry of State Empowerment and Bureaucratic Reform (Kemenpan-RB).

“Don’t bring anything to the president. This is a constitutional courtesy. I have to respect the ongoing legal process,” he continued.