Extraordinary, Ahsan / Hendra Hajar is world champion in the open semifinals of Singapore 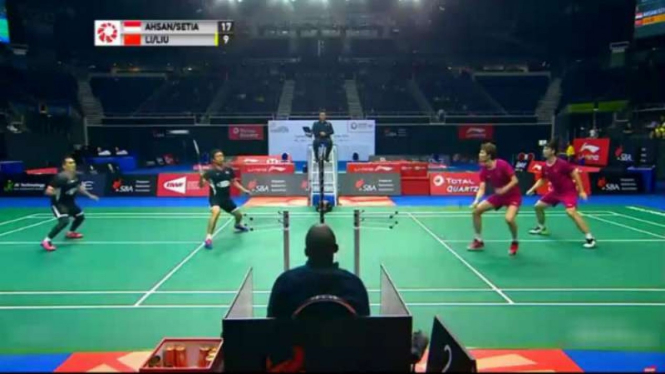 LIVE – Surprisingly, Mohammad Ahsan / Hendra Setiawan was ranked for the final after defeating the 2018 world champion, Li Junhui / Liu Yuchen, in the semifinals of Singapore in 2019.

In the last match played in the 1st Singapore Indoor Stadium, on Saturday night, April 13, 2019, All England Open champion of 2019 only needed time to destroy the hopes of Li / Liu winning the tournament of 355 thousand US dollars.

In the first match, Ahsan / Hendra played with great enthusiasm, they only needed 13 minutes to win the win with a 21-15 landslide.

In that game, although he was no longer young, it was seen that Li / Liu was so depressed before the world champion twice. Therefore, Ahsan / Hendra was so free to dominate the game. Ahsan / Hendra attacked the world's No. 2 defense with a variety of beautiful and difficult attacks.

In the second game, Li / Liu tried to suppress Ahsan / Hendra from the beginning, it was shown that they continued to fight defenses that Hendra did with fast attacks. In fact, the strategy of Li / Liu was very effective, showed that they won 0-2 as a result of a deadly attack.

But Ahsan / Hendra is not an easy opponent for them. Although he was still pressured by the Chinese Grand Dual, Ahsan / Hendra was still able to control the game, the test before the break became points 11-9.

After the rest, Li / Liu tried again to try. Unfortunately, they even became overwhelmed to serve the variation of Ahsan / Hendra attacks. At minute 25, the scoreboard showed incredible numbers, Ahsan / Hendra winning 18-11. And finally, through a soft ball of Hendra in the minute 28, Ahsan / Hendra humiliated Li / Liu with a landslide number 21-14.