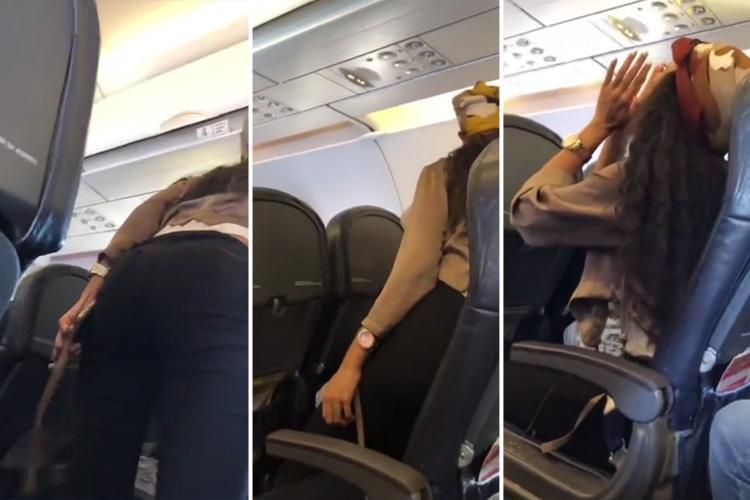 SHOCKING video shows an angry woman who uses homophobic and racist language while slowing down mid-summer.

The passenger also said that he had "threatened a steward" shortly before the plane landed at Los Angeles International Airport last week – but it's unclear why.

A terrible trick was made by another passenger on the flight, who claimed that the woman's fire lasted "about an hour".

An angry traveler is often heard by a man sitting beside her to "close the f ** k up," while other people who were nearby were laughing and watching drama.

And despite the fact that a woman and a man are color men, she calls him: "gay white skin n **** r".

When she was told to stop sweating because of a child in her ears, she answers: "It's not my child, I do not give f ** k."

You can see a stewardist trying to calm down the dreadful ladies while the passenger says he "cools".

But a few seconds later, she returned to begging a man, loudly shouted at the families who went on a flight.

The person who recorded the disgusting dialogue said that the woman "attributed it to other passengers and stewards for about an hour" before the start of the shooting.

An Irish whore had an infection of cockroaches, because the seven men hit the closure

Is not this over?

Teen avoids prisons for sexual assaults on a girl, 6, who for months had suicidal thoughts

Filmer also claimed: "Shortly before this video was recorded, he closed the steward who seemed to come and tried to calm her down after the other participants were unsuccessful.

"That guard called for control of the country and I presume that the police ended with escorting the plane when we landed.

"She used a racial lake and homophobic damage to flying personnel as well as passengers."