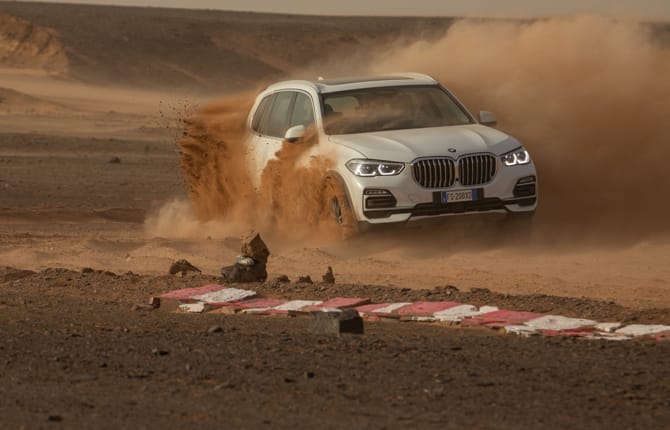 Imagine that you take the Monza circuit, as it is, with the same curves and the same paths, and catapult it in the middle of the desert in Sahara. It looks crazy and instead what they did in Bmv Italy for the launch of the new X5. The historic route was formed in Merzouga, in one of the most widespread areas of Morocco: 5,793 meters high among the sands and walls of the world's most famous desert. Each curve, each immediately, every shikan is faithfully reconstructed on a scale of 1: 1, in the curve radius and at distances.

The company cost two weeks of work for over 50 people, including engineers, surveyors, technicians, workers and pilots. It took 4 days of studying and preparing with geodesists, engineers and architects, with 8 positions for topographic design and simulation. For 9 days, 4 bulldozers and 4 trucks dug up 24 cubic meters at the same time to prepare the land and remove excess sand; while 2 graders and 2 compactors clenched and squeezed the track. Over 3500 cubic meters of land were moved to get life on an off-road course.

The new BMV X5, after traveling through Europe on the road through the stages, therefore reached the circle of "Monza, Sahara" in the impermeable Moroccan desert, where, between sand dunes and walls, he challenged one of the most controversial terrain of the planet and faced with Lesmo , Ascari and Parabolica, proving its off-road ability thanks to the new kOffroad package debuting on this model.

The specific button offers the pilot a choice between four open-air modes (kSand, kRocks, kGravel, kSnov), which automatically determine the ideal car height settings, kDrive system, acceleration and transmission control, and DSC corrective input when you need to prepare for driving on sand, stones, gravel and snow.
The launch of the new Ks5 on the Italian market is scheduled for the weekend on November 24 and 25.