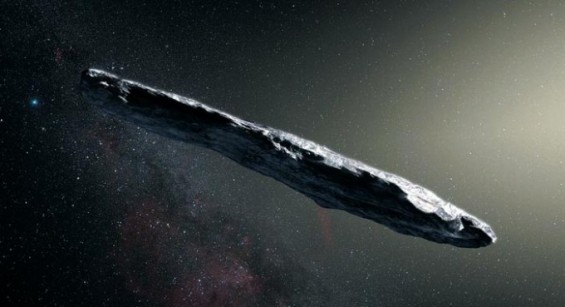 "Omuamua", which entered the Solar System 2017,

Controversies with general asteroids and comet

"Could it be a wandering in the universe or a stranger sent by a stranger?"

On October 19, 2017, the building was first caught on the Pan-STARRS 1 telescope in Hawaii. This mysterious object with an average diameter of 230 meters showed various characteristics of the asteroid or comet made of ice or stone. There are also traces of organic matter on the surface.

Especially in the early entry process, an object moving at a speed of 26km per second has unexpectedly accelerated around the Sun. The normal object passes through the Sun and is subject to gravity resistance, which results in a reduction in speed, which is the opposite.

It turned out to be an alien interstellar object found by the Solar System. This is the first time that people have flown out of the distant universe and discovered an interstellar object that crossed the Solar System. And it was named Oumuamua 1I / 2017 U1, a Hawaiian aboriginal term, a remote communicator. However, no one has answered how the Omua-A identity is and where it comes from.

It was a bit of a shake in the scientific community as a result of the research that Omu Amou had made alien creatures a few years ago and could be the track of a probe sent into space. Professor Abraham Rove, professor of astronomy at Harvard University in the United States, published an analysis of the results of the alien creature, Omuuman, who was faster near the Sun, in an article in the international journal "Astrophisical Journal Letters"

I summarized Harvard's interpretation of what Omumum threw.

▲ There is no heavenly body near the sun that accelerates like Omumu.

= This is a comet. Because of the heat of the sun, ice on the surface melts and can escape in the form of gas. The more comets, the faster. It was thus assumed that the surface of the condensed ice and dust was getting faster when Omuamu left. But it turned out to be a false analysis. The surface did not fall.

▲ Why do you think the surface did not fall?

= If the material falls off the surface, the Omuamua rotation speed should be accelerated at the same time. According to the light analysis from Omuamu, it was confirmed to rotate at intervals of 6 ~ 8 hours, depending on the conditions. This is the result of ignoring the ambient vibrations. The average value did not change much when passing close to the Sun. It is therefore difficult to define Omuama as a comet.

Trajectory (left) that Omunuoga enters the solar system and escapes. It was expected to cross the red track, but near the sun it was faster than expected and actually moved along a blue trail that was about 40,000 kilometers away.

How the speed of Omu Noah accelerated

= There is a technology of Solar Sales & which uses solar radiation for navigation in the universe. Make a thin metal plate in the shape of a core and accelerate to sunlight (photon). The Icarus project in Japan and the US Space Initiative, a private space company, are trying this technology. When Omuamua does not show cometary characteristics, it is estimated that Omuamu will fly in the solar sales regime.

If an alien species sent it, there must be a device for sending and receiving a signal.

In the near future, many researchers measured the Omu Amua signal, but there were still no artificial signals. However, only narrow-passive signals are analyzed and the analysis is still ongoing. There is also a story that he may be trying to transfer space instead of radio waves like SF film "Star Trek".

If there are aliens, why have they sent Omuami for millions of years?

= I do not know. One possibility might not be a specific intention. This is because some of the remains of a probe that were alienated creatures were launched into a universe with a higher level of technology than ours might have accidentally stretched.

Is extraterrestrial life the most likely translation?
There is currently no way to prove it. It is also possible to exclude the possibility of an asteroid or comet that absorbs solar energy from the surface.

There are many objections to Harvard's interpretation. Although the problem of acceleration near the Sun is still unresolved, Omu Amua moves on the same trajectory as the comet, and the solar nuclei have a much more complex vibration template than the vibrations of the sun. The Omuamua identity analysis remains largely in the hypothesis. It was confirmed that Omukua completely deviates from the solar system according to the Pegasus constellation in September.