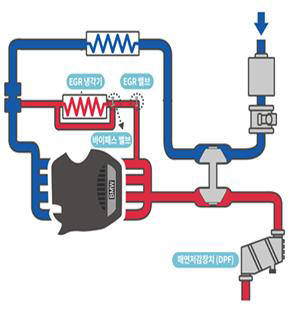 BMV claims and fires for other reasons were reproduced by the civil investigation team. It was found that the fire occurred due to the EGR valve, not the bypass of the EGR. It is suspected that BMV has set the EGR valve open to compel it to comply with environmental regulations, leading to a fire. In addition to the recall of the current EGR module, the possibility of additional recall to the collectors for the introduction of conditions has been increased thanks to the confirmed ventilation process in the suction system.

According to the joint investigation team of BMV Fire and Rescue Commission (Supreme Court of Justice Sung-soo, Riu Do Jeong)

The investigative team stated that when the EGR cooler leaks and the EGR valve is partially open and fixed, the exhaust after-treatment system (DPF / LNT) works during high speed driving.

PM and PM are deposited in a refrigerator in which the leakage water in the EGR module is missed. At this point, the high temperature output gas enters the open EGR valve, and it is found that PM and PM are inhaled. The bulb was attached to the suction system (suction collector), and then a small amount of smoke grew into a flame due to the inhaled air, creating a perforation in the suction system. The result is a test that the fire caused a fire to fly in the machine room and lead to a fire.

According to the research team, BMV confirmed that the EGR bipass valve, which is the state of the fire phenomenon, has so far had nothing to do with the causal agents of the fire. EGR shut-off valve is a device that brings gas directly into the entry system without passing through an EGR cooler.

BMV is in the process of recalling the replacement of the EGR module, assuming that the cause of the fire is on the cold and EGR bypass valve.

The investigating team claims that there is a problem with the input manifolds and the EGR valve. As a result, it is more likely to replace the input collector, as well as the EGR module itself. BMV is able to offer free repair, but the investigative team mainly assesses the possibility of wrong parts.

The team will also confirm the adequacy of the current withdrawal. In order to clarify the causes of EGR decomposition, we check the connection of the electronic control unit (ECU) that is controlled by the EGR system. We will investigate why the EGR valve is open because it is the decisive cause of the EGR valve opening. It is also possible to assume that the problem is that the exhaust gas for high temperature is adjusted to the processing power in order to comply with environmental regulations.

The investigative team said it would continue to check whether EGR defects, cold leaks, and other possible causes of ignition were removed.

In the meantime, experts have testified that the "EGP bipass failure" was done in the car and engine sector, but there was no possibility of flames or ignition.

According to the results of the final investigation, if additional measures are needed, in addition to the current recall measures, an extended recall method will be changed, including the recall of inspiratory collectors, which are confirmed to be punctured. I will propose related measures to the Ministry of Land, Transport and Maritime Affairs. "