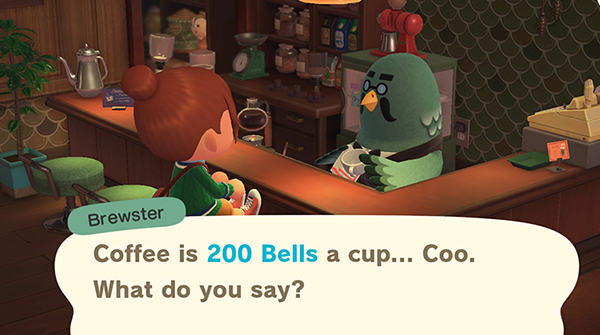 
All the free updates from Animal Crossing have been released, which caught the eye with the announcement of the addition of a coffee shop in September. Through version 2.0, the latest major update made by the production team, a lot of content is added that exceeds fan expectations.

Nintendo unveiled on October 16 the main content included in the free 2.0 update via Animal Crossing Direct. First, as previously announced, a cafe will be opened on the second floor of the village museum. At the request of the museum director, Owl, the cafe will open and you can enjoy drinks such as the coffee served by the coffee master. In addition, it is possible to call the desired residents in the cafe using an amiibo card or similar.

Not only the Master has the face of happiness. A “boat tour” guided by boatman Gapdol, who appeared in the previous play, will be added. You can visit a remote island known only to Gapdol by boat, and it is also possible to discover rare plants on the island. Plus, there’s no shortage of Gapdol’s commercial song, the ship’s song.

On Paniel Island, a plaza will be opened to attract shops open for a limited time at all times. If you manage to raise funds in the square, you can open NPC shops that only appeared for a certain period of time, such as Neulbong and Yeouk. In addition, there are also Lipo and Lisa, who remodel furniture, and Jojirila, who is in charge of divination.

Finally, a recipe for making food with vegetables grown on the island is added. It is possible to cook various dishes and eat food in the home kitchen with grown vegetables. In addition, exchanges with island residents are becoming more detailed, such as morning gymnastics, home decor and island construction. It is a way to interact more closely with residents and increase the options in detail when decorating houses and islands. To this is added the clay collection that was in the previous work and a simple storage cabinet is introduced that can be installed outside the house.

We meet Animal Crossing 2.0 The update will take place on November 5th.

Why the RS virus causes serious illnesses in infants and toddlers