Government researchers say that "we want to work full-time" 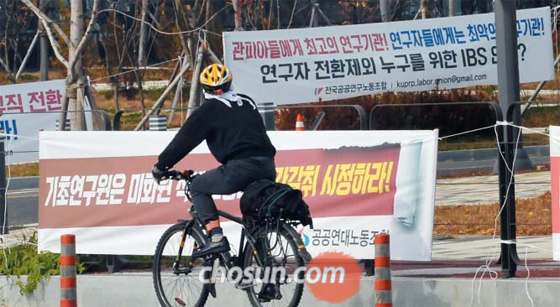 & # 39; IBS for Non-Research Conversion (& # 39; full time & # 39;) IBS for & # 39; Incorrect conversion & # 39; Direct Change! & # 39; In front of the IBS, Daejeon Daeduk Research Complek, there are four big banners It was needed. Ten non-regular researchers and 10 public research unions at KCTU stand in front of the building once or twice a week on weekly commutes and want to gather for "Recently, a protest banner was attached to our building. The union said:" Who does not turn into a lot working hours, and who does not? I can not understand the IBS transition standard. "

Public research institutes, including IBS and government-funded laboratories, are confronted with a conflict over the transition of irregular workers to full-time workers. The Ministry of Science and Technology and the Ministry of Information and Communications announced a policy of regular migration to research institutes at research institutes at the end of last year, but the unions of the trade union could not finish the year. According to the Ministry of Information and Communication (MIC) on March 13, none of the 25 departments that have completed the transition to regular jobs currently have a place. It was not enough to end the transition this year as it already passed through the March goal, which was originally intended to end. However, the government is holding hands because "every agency should take care of it."

◇Government laboratories must move to regular positions and conflicts

Currently, more than thirty researchers from the IBS Center for the Construction of Carbide Structure react to the transition to regular positions in the IBS. When the construction of the research facility is completed in 2021, the project of the Central Ion Accelerator will be concluded with researchers using equipment and researchers, with the exception of basic operational personnel. But last year, when the Ministry of Information and Communication went into regular workforce, irregular workers who were not subject to transition insisted that "we have to be full time," and we stopped the process of IBS transition. IBS is currently negotiating further conversion with them.

IBS is a position that can hardly be transformed into a regular full-time worker due to the nature of the institution managing research projects. In addition to some researchers, IBS works so that professors and researchers of each university gather in a specific project and return to their original organization after returning.

The same goes for other government research institutes, such as the Korea Institute for Aerospace Research Institute and ETRI. The researchers plan to turn 73 people in the first half of this year, but they can not close with some rebels. More than 20 irregular workers belonging to the project team of drone aircraft and a satellite navigation project project recently protested and said, "Why did we miss the conversion target?" It is not included for conversion purposes, since these two organizations have broken down when the project is completed.

However, it is known that irregular workers said: "Korean launch vehicles will end in 2 ~ 3 years, why are they full-time workers?" One agency official said: "As the director, every executive director of a business group is looking for government staff and discussing support for an additional budget, but it does not progress." In the first half of last year, more than 50 members of the Institute of Electronics and Telecommunications Research, which are not the subject of a full-power conversion, respond to the conversion standards set by the organization. Some argued that they should "pull out discriminatory groups" by creating a group called "an unjustified full time conversion committee".

This is caused by the fact that the Ministry of Information and Communication announced in October last year that irregular workers, At that time, the Ministry of Information and Communication aimed at a conversion of 70%. However, frontal laboratories point out that the whole change of regular conversion, which does not take into account the characteristics of the institute, only confused. An investigator who senior researcher at the institute said: "Since the upper limit of the workforce of the research institute is fixed, researchers who are unable to check their abilities are turned into full-time workers. The job can be blocked."

It is still difficult to secure financial resources due to the transition to full-time employment. The number of irregular workers who participated in the survey last year was 6484, and 34.6% of the total number of employees (17,834). The government estimates that about 70% of them will be replaced with full-time employees, which will add another 100 billion volts a year. However, even in the case of growing confusion about moving to full-time employment, the government is in a position to "practically have nothing to do". An official at the Ministry of Information and Communication said: "As the situation differs for each research institute, it can not be solved in the agency." It is not appropriate for the government to start first if the process of regularization does not go beyond the government's guidelines. "